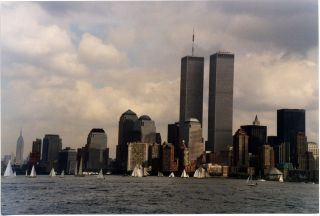 Large enough to require its own ZIP code, the iconic World Trade Center contained the world's tallest buildings when it was dedicated in 1973. More than 50,000 people worked in the buildings, with another 200,000 visiting each day before its destruction in a terrorist attack in 2001.

Originally proposed at the close of World War II as a means to encourage trade in New York City, construction on a "world trade center" began at the 1960s, after the demolition of 164 buildings to make room for the new landmark. Dirt excavated from the site was used to create over 23 acres (9 hectares) of land along the Hudson River, part of Battery Park City in lower Manhattan.

With 110 floors in each tower, the two buildings were higher than the world-record holder at the time, the Empire State Building. The north tower reached 1,368 feet (417 meters) and the south tower was just shy of 1,362 feet (415 m). But their record was only held briefly; the Sears Tower in Chicago, completed a month after the dedication of the World Trade Center, stretched almost a hundred feet higher. When the twin towers collapsed in 2001, the towers held the record as fifth and sixth tallest buildings in the world.

A prominent piece of the New York City skyline, the twin towers were the first high-rises to utilize a vertical framed-tube structural system to compensate for the outside pressures from the wind. The architects designed the building with sky lobbies for express elevators to travel to, an innovative method to minimize the space they occupied. Overall, the building included 97 passenger and six freight elevators.

The north column opened to residents in December 1970, though the top floors had yet to be completed. Tenants began moving into the south tower just over a year later, in January 1972. The two were officially completed and dedicated in April 1973.

The south tower boasted an observation deck on the top floor. The north tower hosted Windows on the World, the world's highest restaurant, on its 106th and 107th floors. Both attracted tourists who wanted to view the city from above.

Like Niagara Falls, their landmark status made them a target for daredevils. On Aug. 7, 1974, Philippe Petit crossed back and forth on a high wire stretching between the two towers eight times in half an hour. Three years later, George Willig, dubbed "The Human Fly" by the press, scaled the side of the north tower.

On Feb. 26, 1993, terrorists exploded a van in an underground parking garage beneath the north tower of the World Trade Center. The blast killed six people and injured over a thousand, but the towers stood strong. Six Muslim fundamentalists were ultimately convicted of the crime.

More than eight years later, on Sept. 11, 2001, terrorists struck again, this time with more chilling results. American Airlines Flight 11, traveling from Boston to Los Angeles, crashed into the north tower of the World Trade Center, smashing through multiple floors. Less than twenty minutes later, United Airlines Flight 175, also flying from Boston to L.A., hit the south tower. Part of a coordinated attack that included an assault on the Pentagon and a failed attempt on what was most likely the Capitol in Washington, D.C., a group of 19 terrorists took control of four airplanes. Three hit their targets; passengers on board the fourth, United Airlines Flight 93, rebelled against the hijackers, and the plane crashed in a field near Shanksville, Pa., killing everyone on board.

The impact into the twin towers initially sparked fire damage, leading to rescue crews rushing into the building. But the destruction was far from over. The south tower collapsed in less than an hour after impact; the north tower in just under two, killing more than 2,700 people within the two towers. Almost 3,000 people were killed in the four plane crashes, including the 19 terrorists involved. [Remembering the Fallen: Memorials Gallery]

The National September 11 Memorial was constructed at Ground Zero, in the footprint of the Twin Towers. Built to remember all of the victims of 9/11, as well as the six victims of the 1993 World Trade Center bombing, the memorial hosts two reflecting pools nearly an acre in size and features the largest manmade waterfalls in the world. Bronze panels containing the names of those who died in the 1993 and 2001 attacks surround the pools.

By the afternoon of Sept. 11, U.S. officials had named Osama bin Laden, leader of the Muslim terrorist group al-Qaeda, as the primary suspect in the attacks. Within a week, the Senate adopted a resolution authorizing the use of the American military against those responsible for the attacks, and President George W. Bush announced that bin Laden was wanted "dead or alive."

The Bush administration went on to declare a War on Terror, seeking to bring bin Laden and al-Qaeda to justice. As such, the United States led the overthrow of the Taliban regime in Afghanistan in 2002 and used the alleged involvement of Saddam Hussein to invade Iraq in 2003.

Within the United States, Congress passed the Homeland Security Act and the Patriot Act. The Patriot Act especially drew criticism because it permitted law enforcement agencies to invade the privacy of private citizens without judicial oversight.

In 2004, Osama bin Laden claimed responsibility for the attacks on 9/11 in a message aired on an Arabic TV station. In 2011, President Barack Obama announced that bin Laden was killed in a firefight in Pakistan, almost a decade after the horrifying attacks.

Despite bin Laden's claims, there are many who believe that the U.S. government maintained some level of involvement with the attacks. Theories abound on whether some U.S. officials helped to plan the attack, or simply knew about it and let it occur. Some suggest that controlled demolitions brought down the north and south towers; others believe the Pentagon was hit by a government-launched missile. [Is This Article Part of a Conspiracy?]

A 2007 poll indicated that almost a quarter of Americans believe that elements in the U.S. government knew of an impending attack and intentionally let them proceed. Similarly, in May 2015, a 60 Minutes/Vanity Fair poll found that 24 percent of Americans believe there is another explanation for the 9/11 attacks Such paranoia may have been fed not only by dissatisfaction with the resulting policies but also with the fact that the War on Terror led to what many felt was an unprovoked attack on Iraq.