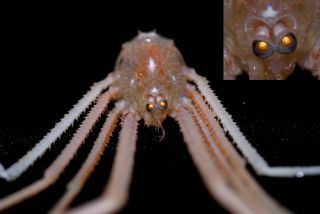 Gastroptychus spinifer (squat lobster) has a body that is about 1/2-inch wide and 1-inch long. Its eyes are quite large for such a small animal.
(Image: © Image courtesy of Bioluminescence Team 2009, NOAA-OER.)

What good is color vision in the dark of the deep sea? For some crabs, an ability to see blue and ultraviolet light may mean the difference between chowing down on a good meal versus a toxic one.

A new study published today (Sept. 6) in the Journal of Experimental Biology finds that some seafloor, or benthic, crabs can see in color. But the crustaceans live in darkness of the deep Caribbean where sunlight does not penetrate, making their sensitivity to blue and ultraviolet light mysterious.

The reason for the color vision, however, may be explained by the concurrent discovery of bioluminescent deep-sea plankton in this environment, which glow blue when they bump against objects along the seafloor. It's possible that the crabs see this blue glow as a sign of a hearty meal, said study researcher Tamara Frank, a biologist at Nova Southeastern University in Florida.

At the same time, the ability to see blue and UV light would also enable the crabs to tell the difference between bioluminescent blue plankton and the dim greenish glow given off by the anemones where the crabs like to perch. [Photos: Glowing Creatures of the Caribbean]

"They just hang out in these plantlike things, and every so often — they have these amazingly long claws — they reach over and they're clearly picking something off and bringing it to their mouths," Frank told LiveScience.

"It would be really cool if they're picking it off because it glows blue and not green," she added.

Frank and her colleagues conducted an exploratory deep-sea mission at three sites near the Bahamas in 2009 on the Johnson-Sea-Link submarine, a Harbor Branch Oceanographic Institute manned submersible. Using the sub's delicate tools, the researchers are able to gently suction seafloor-dwelling crustaceans into opaque boxes, which are then brought to Frank's lab on the expedition ship. Lit only by dim red light so as not to upset the dark-oriented crabs' vision, Frank places electrodes on the crustaceans' eyes to measure their response to different wavelengths and intensities of light. If the eyes respond with an electrical signal, it means that the crab can detect that type of light.

Frank has found two species, Eumunida picta and Gastroptychus spinifer, with the ability to see UV and blue light.

Meanwhile, on the same voyage, Frank's Duke University colleague Sönke Johnsen was sitting in the submersible, waiting for his eyes to adjust to the darkness, when he noticed a greenish glow coming from some of the anemones and other plantlike animals that live on the seafloor. The plankton bumping into the anemones glowed blue.

Anemones would be toxic to crabs, Johnsen realized, while plankton would make a good meal. That's when he came up with the idea that perhaps the deep-sea crabs have kept their sensitivity to light in order to differentiate between the bioluminescence of the two, essentially color-coding "food" versus "toxin."

The idea is only a hypothesis at this stage, and thanks to federal funding cuts to deep-sea research, Frank and her colleagues said they may not be able to test it anytime soon, she said.

Bioluminescence is well known in the open ocean, but little is known about the light shows on the seafloor, Frank said: "Those studies are just really rare."