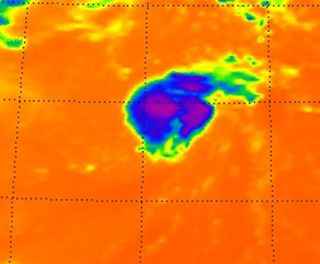 Hurricane Michael is churning over the Atlantic as a powerful Category 3 storm — the first major hurricane to take the stage in a slightly busier-than-usual season.

A major hurricane is defined as a Category 3 storm — a hurricane packing top sustained winds of 111 mph (179 kilometers per hour) or higher.

Michael became a major hurricane at around 5 a.m. today (Sept. 6). It's far out to sea, and poses no threat to land.

Not since 2006 have we made it so deep into the Atlantic season without a major hurricane, said Phil Klotzbach, a research scientist at Colorado State University's department of atmospheric science. In that year, which had the same roster of storm names as 2012, Hurricane Gordon didn't gain full strength as a Category 3 storm until Sept. 14, he told OurAmazingPlanet.

Yet more remarkable than the somewhat late date on the calendar is the sheer number of storms that appeared without making it to the majors.

With 13 named storms so far this year, seven of them hurricanes, it's a little bit unusual that none before Michael became a major hurricane, Klotzbach said.

If Hurricane Leslie, the 12th named storm of the season, doesn't become a major hurricane, Michael will represent the latest letter in the alphabet to become a season's first major hurricane since reliable records began in about 1950, Klotzbach said. [In Images: Hurricane Season 2012]

Klotzbach and other scientists were quick to point out that although that may sound impressive, more storms are named now than in years past. Satellites and hurricane-hunting aircraft allow forecasters to see storms that their predecessors in earlier decades may have missed.

Yet there are environmental factors that are likely to have played a role in keeping this year's storms from attaining Category 3 fury: disruptive winds and dry desert air. "Those seem to be the two big ones," Klotzbach said.

Wind shear — essentially, stacked layers of winds blowing in different directions — appears to have affected the 2012 storms, said Chris Landsea, the science and operations officer at the National Hurricane Center in Miami.

In addition, dry air carried out over the Atlantic from the Sahara can subdue storms to some extent. "Some of the storms may have been ingesting that, and that could cause them to sputter," Landsea said.

However, the dearth of major hurricanes so far isn't cause for celebration, scientists said.

The storms that have hit the United States this year — the strongest of which was a Category 1 hurricane — have brought plenty of misery, as many on the Gulf Coast still suffering in the aftermath of that hurricane, Isaac, can attest. And the season is far from over.

Because major hurricanes are picky — they require particularly warm waters, enough moisture in the atmosphere, and relatively low wind shear to sustain their monstrous energy — most occur later in the season, in August, September and October, when conditions are just right. Half of a season's major hurricanes typically occur in September alone, Landsea said.

"There is every reason to expect we're going to see some major hurricanes," Gerry Bell, the National Oceanic and Atmospheric Administration's lead seasonal hurricane forecaster, told OurAmazingPlanet, about 12 hours before Michael became the first major hurricane of the year.

And, he added, it doesn't take a major hurricane to inflict major damage. "We are in the peak of the hurricane season," he said. "People need to be prepared now."