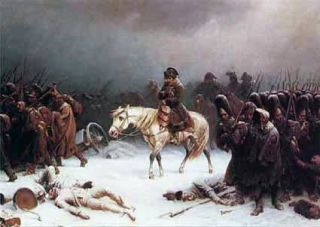 Arsenic poisoning did not kill Napoleon, a new analysis suggests, contrary to claims made in recent years. The results of the study show high levels of arsenic in Napoleon Bonaparte's hair throughout his life, suggesting he was not poisoned at the end of his life while in exile on the island of Saint Helena. Rather he probably absorbed arsenic constantly throughout his life, the researchers say. The cause of Napoleon's death has been in dispute for a long time, with some saying he died of stomach cancer and others suggesting arsenic poisoning during the Emperor's final years on Saint Helena, off Africa in the South Atlantic Ocean. Hair samples For the new study, physicists at the University of Milano-Bicocca and the University of Pavia compared the arsenic levels in hair samples taken from Napoleon Bonaparte at various stages in his life with levels in hairs from Napoleon's son (the King of Rome), Empress Josephine and 10 living persons. The Napoleonic hairs studied by the Italian team came from when he was a boy in Corsica, during his exile on the Island of Elba, on the day of his death (May 5, 1821) on Saint Helena and on the day after his death. Samples taken from Napoleon’s son in 1812, 1816, 1821 and 1826, as well as samples from the Empress Josephine, collected upon her death in 1814, also were analyzed. The hair samples were provided by the Glauco-Lombardi Museum in Parma (Italy), the Malmaison Museum in Paris and the Napoleonic Museum in Rome. The hairs were placed in capsules and inserted in the core of a small nuclear reactor at the University of Pavia. The technique used is known as “neutron activation," which has two advantages: it does not destroy the sample, and it provides extremely precise results even on samples with a small mass, such as human hair samples. The researchers, including Ettore Fiorini of the Italian National Institute of Nuclear Physics and the University of Milano-Biccoca, found traces of arsenic in all the hair samples and were surprised by their findings. Surprise levels First, the level of arsenic in the hair samples from 200 years ago was found to be 100 times greater than the average level detected in samples from persons living today. In fact, the Emperor’s hair had an average arsenic level of around ten parts per one million, whereas the arsenic level in the hair samples from currently living persons was around one-tenth of a part per one million. In other words, at the beginning of the 19th century, people evidently ingested arsenic that was present in the environment in quantities that are currently considered dangerous. The other surprise was that there were no significant differences in arsenic levels between when Napoleon was a boy and during his final days in Saint Helena. According to the researchers, including toxicologists who participated in the study, it is evident that this was not a case of poisoning but instead the result of the constant absorption of arsenic. The results will be published in the journal Il Nuovo Saggiatore.