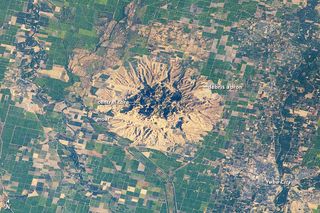 California's Sutter Buttes are the remnants of a volcano that are sometimes called the "smallest mountain range in the world." They were photographed by an astronaut aboard the International Space Station on July 29, 2012.
(Image: © NASA)

Rising almost 2,000 feet (610 meters) above the flat agricultural fields of the Great Valley of central California, the Sutter Buttes present a striking contrast to the land around them in this photo taken by an astronaut aboard the International Space Station on July 29.

The Buttes are yellowish tan in the middle of the image, surrounded by green farmland. Urban areas such as Yuba City, California — located 11 miles (18 kilometers) to the southeast — appear as light to dark gray stippled regions.

The Sutter Buttes are remnants of a volcano that was active approximately 1.6 million to 1.4 million years ago during the Pleistocene Epoch, according to a NASA release. They are sometimes called the "smallest mountain range in the world," NASA said.

The central core of the Buttes is characterized by lava domes — piles of viscous lava that erupted onto the surface and were built higher with each successive layer. Today, these lava domes form the high central hills of the Buttes; shadows cast by the hills are visible at the center of the image.

What is known as a "debris apron" of fragmented material created by occasional eruptions of the lava domes surrounds the core. Between the apron and the core lies a "moat" that was formed by erosion of older, exposed sedimentary rocks that underlie the volcanic rocks.

The image appears slightly distorted (oblique) due to the viewing angle from the International Space Station, NASA noted.