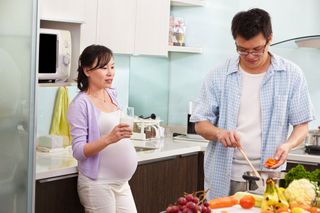 (Image: © Pregnancy and cooking via Shutterstock)

A group of compounds used in a variety of products, including non-stick cookware, may influence a baby's growth in the womb and after birth, a new study suggests.

In the study, pregnant women who were exposed to high levels of polyfluoroalkyl compounds, or PFCs, had babies that were smaller at birth and larger at age 20 months compared with those born to women exposed to lower levels of the compounds.

The results held even after the researchers adjusted for factors that could influence the babies' weights, including the mother's smoking habits and weight before pregnancy.

The findings agree with previous studies on the effect of PFC exposure during in-utero development. A recent study in Denmark found that girls exposed to PFCs in the womb were more likely to be overweight at age 20, said study researcher Michele Marcus, a professor of epidemiology at Emory University's Rollins School of Public Health.

It's important to note the new study only found an association, and not a cause-effect link.

It's not clear how PFCs might influence growth rates, but it's possible they have an effect on fat metabolism, Marcus said.

PFCs have thousands of uses in manufacturing, and most people have the compounds in their bodies. They are slow to break down, and persist for many years in the environment. They are commonly found in coatings of packaging products, as well as water-resistant clothing.

In the new study, Marcus and colleagues analyzed information from about 450 women living in England who were pregnant between 1991 and 1992, and gave birth to daughters.

Blood samples taken during pregnancy from the mothers were tested for the concentration of PFCs. Information about their children's weight and length were collected at birth, and again when they were 20 months old.

The researchers were not able to examine the children's exposure to PFCs after birth, which may have affected the results, they said.

Because the women in the study had their blood collected about two decades ago, when PFC levels in the environment were higher, the findings do not tell us what the risks of exposure are to women who become pregnant now, said Dr. Magaly Diaz-Barbosa, medical director of neonatal services at Miami Children's Hospital, who was not involved in the study.

"While it would be reasonble for today's pregnant women to try to avoid exposure to these compounds, studies need to be conducted using more recent data before we can draw conclusions about the risks," Diaz-Barbosa said.

How to avoid PFCs

Pregnant women should avoid exposure to chemicals that could interfere with hormone signals, Marcus said.

To do this, Marcus recommended avoiding use of non-stick cookware (use iron or stainless steel instead), and not heating microwave food in its packaging.

"Cardboard food packaging is often coated with PFCs to prevent the food from sticking to the cardboard," Marcussaid.

Marcus also recommended not to heat food in plastic containers in the microwave.

The study was published online Aug. 30 in the journal Environmental Health Perspectives.

Pass it on: Exposure to PFCs in the womb may influence a baby's growth.