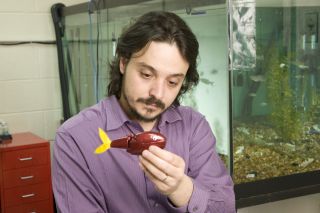 For a researcher who builds robots, Maurizio Porfiri credits his success to an unexpected source — literature. Paul Auster's novels in particular, with their scenes of Brooklyn, which is home to the researcher’s own Polytechnic Institute of New York University.

As a teen growing up in Italy, Porfiri read Auster as well as Robert Musil, Mikhail Bulgakov, Philip K. Dick and John Fante. They helped shape his creativity, he says. “Being creative and being curious is more important than being the smartest or the best at equations if you want to be a great engineer or researcher,” he tells Brooklyn grade-school students during a demonstration of the robotic fish he designs to mimic leadership cues of real fish. The goal is for the robots to direct living fish away from danger.

In 2012, Popular Science included the self-described “okay student” in its Brilliant 10 — an elite group of scientists under 40 whose work stands to dramatically impact their fields. Porfiri, who holds a Ph.D. in engineering mechanics from Virginia Polytechnic Institute and a Ph.D. in theoretical and applied mechanics from Sapienza University of Rome, is also a recipient of a 2008 NSF CAREER award.

Below, he answers the ScienceLives 10 questions.

My main drive was my interest in being at the interface of different fields. It’s there that I can always learn more, and this feeds my curiosity and desire to expand what I know. I was trained in electrical engineering and moved into mechanics. With the multidisciplinary research I’m doing now, I can go beyond both electrical and mechanics.

It’s from my grandparents: “Identify what you want to do and just do it. Don’t worry about it being too hard in the short-term. Focus on the long-term.”

They weren’t exactly experiments, but there are two things related to what I do now as a researcher that, looking back, really influenced me. My uncle bought me a little electrical kit that I used to make a radio. That represents the engineering side of what I do, the putting things together part. The other thing is really where my heart was. It was the science side, the observations I made of animals at the zoo and the aquariums I went to with my family as a child.

There are three: 1) That I always have to keep learning 2) being a professor and helping others grow in an academic sense and beyond, and 3) having the freedom to choose what I want to address in my research based on what I want to study over my career.

Being humble is very important. You have to be okay with not knowing everything and being open to learning from others. Humility also helps in nurturing the work ethic of the students you train. While good researchers need to be humble, they also need to be stubborn. This helps to develop the perseverance required to do quality research.

Most of the benefits are environmental. My research, and what I work with my team on, potentially will help protect endangered animals and animals in dangerous situations like environmental disasters.

We also use our research to inspire young people to understand that engineering is just as much creative as it is technical, maybe even more so. Our work is extremely visual and exciting for kids. They see the robotic fish and see a different dimension to engineering. We hope it impacts their thinking about a career in the STEM fields (science, technology, engineering, mathematics).

There are so many people who have influenced me. Some I have met, some I haven’t. Of those I’ve met, my Ph.D. advisor at Virginia Tech was particularly influential. He taught me what it really takes to grow as a scientist and engineer.

Of the people I’ve never met, writers such as Musil, Auster, Dick and Fante were really important in shaping my personality. Reading them as a teenager nurtured the creative part of me. Musil especially helped me see the emotional side of science and mathematics.

That you have to be the inventor of your own problems. The experiments researchers work on are of their own making. This requires a type of creativity that I think many would find fascinating and exciting to learn about.

A photograph of my mother when she was four years old.

The National is a band I like a lot. Death Cab for Cutie, too. Then there’s the 80s music I listen to: The Cure, The Smiths, Depeche Mode.

Editor's Note: The researchers depicted in ScienceLives articles have been supported by the National Science Foundation the funding basic research and education across all fields of science and engineering. Any opinions, findings, and conclusions or recommendations expressed in this material are those of the author and do not necessarily reflect the views of the National Science Foundation. See the ScienceLives archive.