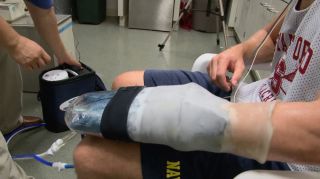 A cooling glove resembling a high-tech oven mitt has proven it can boost sports performance to levels beyond steroid users' wildest dreams — to the point where college and professional teams have already begun adopting the technology for their athletes.

The plastic glove cools a network of veins in human palms that typically act as radiators to expel heat from the body, according to Stanford University News. Such cooling appears to practically erase muscle fatigue regardless of the exercises done — pull-ups, bench presses, running or cycling.

"Equal to or substantially better than steroids … and it's not illegal," said Dennis Grahn, a biologist at Stanford University and co-inventor of the cooling glove.

The glove's airtight seal allows it to create a slight vacuum that permits the veins to expand and draw in more blood for rapid cooling through circulated water in the glove lining. Such technology allows exercisers to enjoy huge gains in recovery without evidence of bodily damage from overworking the muscles.

College athletic programs such as Stanford's football and track and field teams have already begun using versions of the glove. Not to be outdone, professional teams such as the San Francisco 49ers, the Oakland Raiders and Manchester United soccer club have also followed suit.

Body temperature is crucial because too much heat can force muscle cells to shut down lest they end up self-destructing. The cooling glove acts by quickly returning the muscle cells to their original active state.

Grahn first stumbled upon the unusual sports technology with H. Craig Heller, fellow Stanford biologist, when they tried to answer a longstanding mystery — how black bears are able to cool themselves with all that fur.

The biologists discovered that bears and other furry animals have hairless patches of skin with networks of veins lurking close to the surface. Those special veins, called AVAs (arteriovenous anastomoses), appear to be designed specifically for regulating core body temperature.

The technological shortcutting of the body's natural muscle fatigue could also help patients in medical scenarios, or possibly help out soldiers as part of futuristic combat gear. But it seems almost certain that many more professional athletes — including Olympic champions — will turn to the device for a boost that's better than illegal drugs.