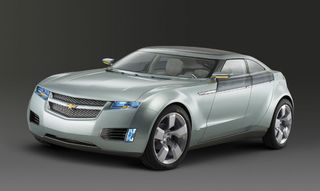 The GM Volt, which runs off batteries that can be recharged from a wall outlet, or by a small gas engine under the hood.
(Image: © General Motors)

A new concept car from General Motors could get 53 mpg on a propulsion system pioneered in submarines about a hundred years ago.

Rechargeable batteries power an electric motor that turns the wheels. There's also an engine, which can be used to charge the batteries. The setup worked for the U.S. Navy during the Wilson Administration, so it just might also shine on 21st Century American highways. At least that's what GM apparently hopes, as it is reportedly intends to have the car in production by 2010 as an addition to the Chevy lineup.

"They have taken the way that the automobile industry thinks about hybrid cars, and turned it on its ear," said Michelle Krebs, editor at Edmunds AutoObserver.com. "If you don't drive far, you may never need gasoline. No other major car maker had done this."

Most hybrid cars, she noted, retain a connection between the engine and the wheels, and use the electric motor to supplement the gasoline engine.

The keel of the Volt (built on a four-door Chevy Cobalt chassis) contains 16 kilowatt-hours worth of lithium ion batteries, which power a 120-kilowatt motor, enough to accelerate the car from zero to 60 in 8.5 seconds, according to GM's specs. Leaving a 50 percent reserve, eight kilowatt hours should get you 40 miles of road travel, which is enough for many commutes.

Plugging into a 110-volt outlet will recharge it in about six hours, assuming you need a full recharge of 8 kilowatt-hours. Nationally, the average price for electricity is 10.94 cents per kilowatt hour, so "refueling" would cost 87.5 cents.

If you need to go more than 40 miles, the Volt has a small (1.3-liter, 3-cylinder) engine that cuts in, powering a generator that recharges the battery while you are driving.

With a charged battery and a full tank with 12 gallons of gas, you are supposed to be able to go 640 miles. That's 53 miles per gallon.

Diesel-electric submarines, such as were used in World Wars I and II, used similar arrangements, albeit it with diesel rather than gas engines. The engines could be used to charge the batteries while on the surface, and battery-powered motors ran the submarine while submerged.

But thanks to its crew of several dozen specialists, the submarines had more power options. For instance, they could run off the engines alone or charge the batteries while standing still. The submarines could not, however, be recharged through a wall receptacle, like the Volt.

The Volt was introduced last year as a concept car.

"An auto company usually brings out a concept car prior to the decision to build it," said GM spokesperson Carolyn Normandin. "While we have not announced production, we have put together contracts to partner with the firms that make the batteries. That shows we are interested in advancing it — there is a lot of passion behind it, since it is an exciting idea."

Krebs said GM still has technical problems it needs to solve before launching the Volt, such as heat dissipation from the batteries.