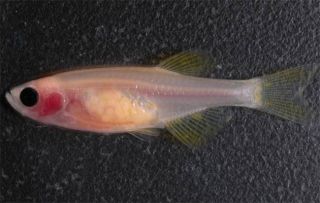 Researchers created a see-through zebrafish so they can study disease processes, including the spread of cancer.
(Image: © Richard White/Children's Hospital Boston)

A newly bred fish bares all in the lab, revealing brain, heart and other internal organs in the name of research.

Scientists are breeding zebrafish with see-through bodies in order to make studying disease processes easier, including the spread of cancer.

The transparent fish, described in the Feb. 7 issue of the journal Cell Stem Cell, are allowing researchers at Children's Hospital Boston to directly view fish's internal organs and observe processes such as tumor growth in real-time in living organisms. Scientists previously studied disease in the embryos of zebrafish, which are naturally transparent. But their clear bodies turn opaque when they grow into adults. The newly created zebrafish stays transparent throughout its lifetime.

"Everything after four weeks has been invisible to us," said study team member Richard White, a clinical fellow in the Stem Cell Program at Children's Hospital Boston.

Zebrafish are genetically similar to humans in many ways and serve as good models for human biology and disease.

Traditionally, researchers have relied on information collected after the diseased animal died to infer anything about human ailments. But for rapidly changing processes such as cancer, this snapshot method is bound to miss something. "It's like taking a photograph when you need a video," said White, also an instructor of medicine at the Dana-Farber Cancer Institute in Boston.

White created the transparent fish, which he nicknamed Casper, by mating two existing zebrafish breeds, one that lacked a reflective skin pigment and the other without black pigment. The offspring had only yellow skin pigment, essentially appearing clear.

In one experiment, White and his colleagues inserted a fluorescent melanoma tumor into the abdominal cavity of the transparent fish. By observing the fish under a microscope, they found that the cancer cells started spreading within five days. White could actually see individual cells spreading.

"The process by which a tumor goes from being localized to widespread and ultimately fatal is the most vexing problem that oncologists face," White said. "We don't know why cancer cells decide to move away from their primary site to other parts in the body."

The spreading melanoma cells appeared to flock toward the skin after leaving the abdominal cavity. "This told us that when tumor cells spread to other parts in the body, they don't do it randomly," White said. "They know where to go."

White ran a similar experiment in which he transplanted fluorescent blood-forming stem cells from another zebrafish into a transparent one. By four weeks, the stem cells had visibly moved into the see-through fish's bone marrow and started growing.

Marrow, the soft fatty tissue inside bones, supports stem cells that each ultimately become a type of blood cell, which gets released into the bloodstream. Any disease that disrupts the production of mature blood cells or their precursors can cause a bone marrow disorder, such as leukemia.