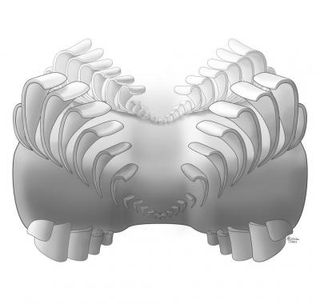 This is a reconstruction of the Odontogriphus mouthparts.
(Image: © Marianne Collins 2012)

The inside of a mollusk's mouth is a fearsome sight to behold. Most mollusks, from giant squids to predatory slugs, have radulas, or tonguelike structures covered with interlocking teeth that move like a conveyor belt to slice and steer prey down the throat. But a new analysis of 500-million-year-old fossils suggests that the earliest radulas were used merely to slurp up mud-covered food from the seafloor.

University of Toronto graduate student Martin Smith had been examining hundreds of fossil specimens of the Cambrian animals Odontogriphus omalus, a naked slug, and Wiwaxia corrugata, a soft-bodied bottom-dweller covered with spines and scales. (The creatures would have lived at about the same time as an odd shrimplike creature that could grow up to 6 feet (1.8) in length and was equipped with spiny limbs on its mouth for snagging prey.)

Scientists had been unsure about where these animals fit in the evolutionary tree, whether they were members of the groups Mollusca, Annelida, or a group containing molluks and annelids. The basis for the confusion had to do with the organisms' bizzare mouthparts, which resembled both the radula of mollusks and the jaws of some annelid worms.

Now Smith, using a special electron microscope, was able to see details of the mouths of these fossils that suggest they represent early mollusks.

"I put the fossils in the microscope, and the mouthparts just leaped out," Smith said in a statement from the University of Toronto. "You could see details you'd never guess were there if you just had a normal microscope."

The mouthparts of the animals look like shorter and squatter precursors to modern radulas, Smith said. He determined that these animals likely had two to three rows of about 17 teeth that would have moved around the end of a tongue in the conveyor-belt fashion seen in mollusks today, scooping food, like algae, from the seafloor.

"When I set out, I just hoped to be a bit closer to knowing what these mysterious fossils were," Smith said in the statement. "Now, with this picture of the earliest radula, we are one step closer to understanding where the [mollusks] came from and how they became so successful today."

The study was published this week in the journal Proceedings of the Royal Society B.