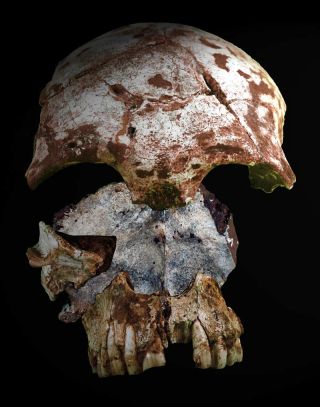 Newfound pieces of human skull from "the Cave of the Monkeys" in Laos are the earliest skeletal evidence yet that humans once had an ancient, rapid migration to Asia.

Anatomically modern humans first arose about 200,000 years ago in Africa. When and how our lineage then dispersed out of Africa has long proven controversial.

Archaeological evidence and genetic data suggest that modern humans rapidly migrated out of Africa and into Southeast Asia by at least 60,000 years ago. However, complicating this notion is the notable absence of fossil evidence for modern human occupation in mainland Southeast Asia, likely because those bones do not survive well in the warm, tropical region.

Now a partial skull from Tam Pa Ling, "the Cave of the Monkeys" in northern Laos helps fill in this mysterious gap in the fossil record. [See Photos of "Monkey Cave" Fossils]

"Most surprising is the fact that we found anything at all," researcher Laura Lynn Shackelford, a paleoanthropologist at the University of Illinois, told LiveScience. "Most people didn't think we'd find anything in these caves, or even in the region where we're working in mainland Southeast Asia. But we're stubborn, gone where no one's really looked before, or at least in almost a century."

The fossils were discovered in 2009 in the limestone cave, which is located at the top of the Pa Hang Mountain 3,840 feet (1,170 meters) above sea level.

"The cave is surrounded by lots of papaya and banana trees, so a troop of monkeys likes to come and forage there, therefore its name," Shackelford said.

There were many challenges working in this area.

"It's incredibly difficult to access the site — it's only 150 miles (240 kilometers) from the capital, but it takes us two days to drive there because of the rough terrain," Shackelford said. "We have to hike up the side of a cliff, do a bit of rock-climbing to get to the mouth of the cave, and then going in, we have to go 60 meters (200 ft) down a slope of wet clay. We also have to carry a generator and lights with us to see in the cave. We have to push pigs out of the way to get through the jungle — there are just pigs wandering around there." [Amazing Caves: Photos of Earth's Innards]

"Every bit of clay has to be removed and taken back up by hand, trowel and bucket, so work is incredibly slow," she added. "We only go in the dry season in the winter, so we don't really have to deal with insects and snakes — well, we did have snakes fall into the pit while excavating. And in the cave, we've had more than our fair share of spiders and bats."

No artifacts were found at the site, nor were signs of human occupation.

"We think this fossil was outside with other fauna and flora, and during the rainy season, rain washed it into the cave," Shackelford said. "In subsequent seasons, more sediment washed into the cave and covered it."

The shape of the bone and teeth is distinctly anatomically modern human, not like those of an extinct lineage such as the Neanderthals. A variety of dating techniques of the sediments surrounding the fossils suggests they are at least 46,000 to 51,000 years old, and direct dating of the bone suggests a maximum age of about 63,000 years. This makes these fossils the earliest skeletal evidence for anatomically modern humans east of the Middle East.

These findings "change the thinking regarding modern human migration routes into Asia, that there were more routes of dispersal than previously thought," Shackelford said.

"The typical thinking was that once modern humans hugged the coastline to go from India to Southeast Asia, they went southward into Indonesia and Australasia (the region comprising Australia, New Zealand and neighboring Pacific islands)," she explained. "We think they absolutely did that, but we're also suggesting other populations probably went north or northeast toward China, and some went through the mountains into mainland Southeast Asia, taking advantage of river systems. Beforehand, no one thought they would have gone into the mountains of Laos, Vietnam and Thailand."

The researchers are now attempting to extract DNA from these fossils to see how related they may or may not be to later humans that once lived or currently live in the area. In the future, "the work we have is pretty boundless — there are literally thousands of limestone caves we can work on in this area to look for early modern humans," Shackelford said. "We can work here for the rest of our careers or lives and not see all the caves."

The scientists detailed their findings online Aug. 20 in the journal the Proceedings of the National Academy of Sciences.