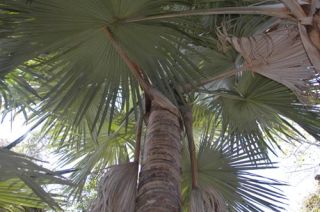 Newly discovered palm tree in Madagascar. The tree, discovered by a strolling Frenchman and his family, is not only a new species, but a new genus.
(Image: © John Dransfield)

Botanists are marveling at the discovery of a towering palm tree on Madagascar that essentially flowers itself to death. The palm has a huge trunk that reaches a whopping 59 feet (18 meters) in height and is topped by fan leaves 16 feet (5 meters) in diameter. The tree is the most massive palm ever found on the richly diverse island and one of the largest known flowering plants — the trees can even be spotted on Google Earth. Hundreds of tiny flowers that burst from the treetop are pollinated by insects and birds and develop into fruit. As soon as the tree fruits, its nutrient reserves are depleted and the entire tree topples and dies. The tree was discovered recently by a French plantation owner on a walk with his family, who took pictures that became circulated to amazed botanists at Kew Gardens in London. The experts had never seen anything like it. DNA analysis of the palms showed that they were not only a new species, but a new genus of palm. Only three other genera are known in the next closest-related group of palms, which are scattered across Arabia, Thailand and China. This evolutionary lineage has never before been seen in Madagascar "It is very difficult with current knowledge to explain how it could ever have reached Madagascar," said Kew research fellow John Dransfield. Dransfield and his colleagues, whose study of the palm is detailed in the Jan. 17 issue of the Botanical Journal of the Linnean Society, estimate that there are fewer than 100 of the newly named palms on the island. Like many other plants and animals on Madagascar, the plants are under threat — only 18 percent of the island's native vegetation remains intact.