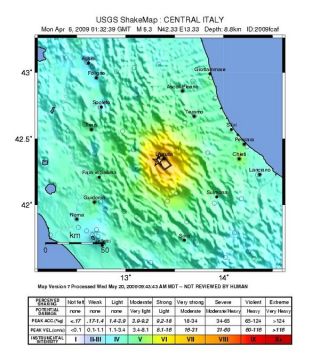 The shaking intensity of the magnitude 6.3 earthquake that struck L'Aquila, Italy on April 6, 2009.
(Image: © USGS)

Amid weeks of endless tremors, in a central Italian city already destroyed by an earthquake, two warring factions laid down their arms, signed a truce and took cover in their huts. The earthquake of Dec. 3, 1315, had stunned the men of L'Aquila into retreat. It was a sign, they believed, that their years-long war should immediately end.

Nearly 700 years later, a historical seismologist at Italy's National Institute of Geophysics and Volcanology uncovered that treaty and used it, along with hundreds of other historical documents, to piece together the seismic history of central Italy's Abruzzo region.

The history that Emanuela Guidoboni and her team found was a tumultuous one: Hundreds of quakes have rocked Abruzzo over the last two millennia. Guidoboni's group believes its findings, which span 15 centuries, will help improve seismic hazard calculations for this quake-prone region.

The highest peak of the Appenine Mountains lies in Abruzzo, and the same forces that built the mountain range drive the region's earthquakes. Accounts of temblors there date back to the first century, and the region still experiences seismic shifts; a deadly earthquake struck the city of L'Aquila April 6, 2009.

Guidoboni's team combed through hundreds of official documents, papal letters, military accounts and archaeological reports for evidence of ancient quakes. The group's findings appear in the August issue of the Bulletin of the Seismological Society of America.

Overall, the region seems to experience about two strong earthquakes (magnitude 6 to 7) each century, with many smaller bouts (magnitude of at least 4.8) every 10 to 15 years. Tremors often hit in rapid succession — just hours apart in some cases — and aftershocks can go on for weeks after a major quake, as in the 1315 L'Aquila event. [Video: What Does Quake 'Magnitude' Mean?]

Ancient cities along the Aterno-Pescara River, including the one that would eventually become L'Aquila, often faced economic crises after earthquakes and were even abandoned at various times, Guidoboni said. Occasionally, though, the quakes had less disastrous effects, such as the 1315 treaty that ended the L'Aquila conflict.

Ancient cults revolved around seismic activity, she said. Near an active fault outside of L'Aquila, for example, men would race barefoot through rugged terrain to reach a large, split rock that was said to be the home of a dragon. The men would then sprinkle the path with their own blood to ward off bad luck and future quakes. (The dragon was a symbol tied to earthquakes in ancient cultures.)

Many of those ancient rituals have disappeared over the years. "The ancient communities, through religion, fairy tales, beliefs and place names, had more contact with their history of earthquakes" than modern communities do, Guidoboni told OurAmazingPlanet.

Although the team uncovered a wealth of clues about past earthquakes, there's still a significant gap in records from about the fourth century to the 14th century. Guidoboni calls this span of the Middle Ages the "lost millennium."

People were largely illiterate and constantly fighting during this period, she explained. "The towns were small, almost military castles, and the people were always fighting among themselves. There was really no urban cultural center at the time," she said in comments translated from their original Italian.

To piece together the seismic history of the lost millennium, researchers probably will need to turn to ancient church records, such as the Vatican Secret Archives, and delve further into archaeological investigations, Guidoboni said.

"I think research still has surprises in store for us," she said.