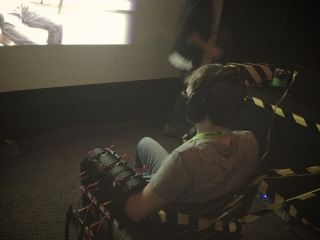 The Chilly Chair can intensify game or movie experiences by raising the hairs on a person's arm.
(Image: © Ker Than)

The armrests of the Chilly Chair, a project by doctoral student Shogo Fukushima, do just that. Having one's hair stand on end is a natural response to emotions such as fear, surprise  and feeling touched or moved. Fukushima, who studies at the University of Electro-Communications in Tokyo, wanted to try artificially inducing the hairy reaction to intensify people's responses to movies and games. "We want to enhance people's emotion," he said.

InnovationNewsDaily and other conference attendees tried out the chair Aug. 6 during SIGGRAPH, a conference about interactive technologies hosted by the Association for Computing Machinery. Users sat in the chair, resting their forearms inside black tubes that arch over the armrests. To activate the chair, one of Fukushima's colleagues sent 10 kilovolts of electricity through the arches. ['Smart Fur' Lets Robo-Pets Read Owners' Emotions]

The arches are made of three layers. From the inside surface to the outside, the layers include an insulating dielectric plate, an electrode and a rubber plate. The voltage goes through the electrode, polarizing the dielectric plate. Users' arm hairs are attracted to the polarized material, so they stand up. People may experience a similar feeling when they take clothes out of the dryer that are charged with static electricity.

At the same time Fukushima's colleague activated the Chilly Chair, he played a loud alarm sound and flashed an image of a wide-eyed, gaping-mouthed man on the projector screen in front of the chair. Unfortunately, we had already caught a glimpse of the surprised man photo while another SIGGRAPH attendee was testing the chair, so we were not surprised, but the hair-raising did feel prickly and a little unsettling.

It's still uncertain whether induced hair-raising truly enhances people's emotions, however. Before SIGGRAPH, Fukushima and his colleagues tested the chair under controlled conditions and saw promising results, but they had only six study volunteers.

For his next project, Fukushima said he plans to study how he can add sensors to the Chilly Chair that would measure people's skin conductance to detect their emotions. The chair would then raise users' arm hairs to enhance the emotion they were already feeling. Such a chair would work with any entertainment, including paper books, because it wouldn't need to be digitally linked to a movie's scary scenes, Fukushima said.

Although Fukushima's studies may seem quirky to some, Joseph LaViola, a computer scientist at the University of Central Florida in Orlando, said several researchers are working on detecting video game players' emotions and enhancing their feelings. LaViola was part of a SIGGRAPH panel on motion control in video games held Aug. 5.