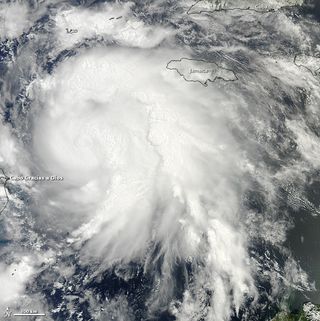 Tropical Storm Ernesto has strengthened and officially become a hurricane, according to the latest update from the U.S. National Hurricane Center and hurricane hunters who flew through the storm.

Ernesto, situated about 185 miles (295 kilometers) east of Chetumal, Mexico, is packing winds of 80 mph (130 kph), making it a Category 1 hurricane on the Saffir-Simpson scale.

A hurricane warning is in effect from Chetumal to Tulum on the east coast of the Yucatan Peninsula and the entire coast of Belize. The island of Cozumel has also been included in the warning.

The storm is expected to strengthen further before making landfall.

Hurricane Ernesto is expected to pass over the east coast of the Yucatan later tonight (Aug. 7). After it passes over the peninsula, it will emerge over the Bay of Campeche on Wednesday afternoon or evening. Parts of the Gulf of Mexico coat of Mexico will likely experience tropical storm conditions.

Throughout the day today, the coast of Honduras may still experience tropical storm conditions.

Belize and the Yucatan are expected to see rainfall totals between 4 and 8 inches (10 and 20 centimeters) with localized areas seeing up to 12 inches (30 cm) of rain.

Storm surge is expected to raise sea levels by 2 to 4 feet (0.6 to 1.2 meters) above normal tide levels in some areas and will be accompanied by "large and dangerous waves," the NHC warned in its forecast.

The National Oceanic and Atmospheric Administration will be issuing an updated forecast for the remainder of the 2012 season on Thursday (Aug. 9). August and September are typically the busiest months of the hurricane season.