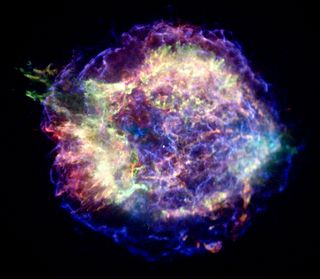 A supernova like that one that formed this remnant, Cassiopeia A, may have sparked the formation of our solar system, an August 2012 study suggests.
(Image: © NASA)

The shock wave from an exploding star likely helped trigger the formation of our solar system, according to a new 3D computer model, researchers say.

The solar system is thought to have coalesced from a giant rotating cloud of gas and dust known as the solar nebula about 4.6 billion years ago. For decades, scientists have suspected a star explosion called a supernova helped trigger our solar system's formation. In particular, the shock wave from the explosion is thought to have compressed parts of the nebula, causing these regions to collapse.

According to this theory, the shock wave would have injected material from the exploding star into the solar nebula. Scientists have previously detected potential evidence of this pollution in meteorites. These contaminants are remnants of short-lived radioactive isotopes — versions of elements with the same number of protons as their more stable cousins, but with a different number of neutrons.

However, analysis of the short-lived radioactive isotopes and their daughter elements seen in primitive meteorites raised a challenge to the supernova theory of the solar system's formation. The evidence suggested the short-lived radioactive isotopes had to have formed in the supernova, made their way into the solar nebula and been trapped within the meteorites all in less than a million years. [Supernova Photos: Great Images of Star Explosions]

To see if a supernova could explain this pattern of isotopes seen in primitive meteorites, scientists developed computer models of supernova shock waves and solar system formation.

"The evidence leads us to believe that a supernova was indeed the culprit," said study lead author Alan Boss, an astrophysicist at the Carnegie Institution in Washington, D.C.

Previously, Boss and his colleague Sandra Keiser developed two-dimensional models involving the short-lived radioactive isotope iron-60, which is only created in significant amounts by nuclear reactions in massive stars and must have come either from a supernova or from a giant star called an AGB star. These models showed the iron-60 seen in primitive meteorites probably came from a supernova, since shock waves from AGB stars would be too thick to inject iron-60 into the solar nebula. In contrast, supernova shock waves are hundreds of times thinner.

Now Boss and Keiser have developed the first 3D computer models of supernova shock waves and solar system formation. These enabled them to see the shock wave striking the solar nebula, compressing it and forming a parabolic shock front that enveloped the cloud, creating fingerlike indentations in the cloud's surface. These "fingers" injected short-lived radioactive isotopes from the supernova into the nebula. Less than 100,000 years later, the cloud collapsed, triggering the birth of our solar system.

The 3D models revealed that only one or two "fingers" could explain the short-lived radioactive isotopes found in primitive meteorites. However, the researchers are still trying to find various combinations of supernova shock wave parameters that will line up with observations of exploding supernovas. Also, they need to make the solar nebula rotate "so that it will form a star surrounded by a protostellar-protoplanetary disk after it collapses," Boss told SPACE.com.

Boss and Keiser will detail their findings in an upcoming issue of the journal Astrophysical Journal Letters.

This story was provided by SPACE.com, a sister site to LiveScience. Follow SPACE.com @Spacedotcom. We're also on Facebook and Google+.