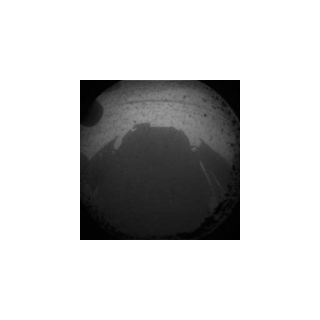 This first image from the Mars rover Curiosity on the surface of Mars shows the rover's shadow as seen by a navigation camera. NASA released the image just minutes after the rover's successful Aug. 5 PDT, 2012 landing.
(Image: © NASA)

Cheers, tears and hugs all around greeted the sight of the first photos from NASA's Curiosity rover on the surface of Mars.

The photos, tiny and grainy at first, offered the first visual evidence that the $2.5 billion rover had made it to Mars after a nail-biting landing at 10:32 p.m. PDT Sunday, Aug. 5 (1:32 a.m. EDT and 0532 GMT Monday). The 1-ton vehicle had just been lowered onto the Martian surface by tethers attached to a hovering "Sky Crane" in a first-of-its-kind maneuver. NASA got word of the successful landing 14 minutes after it happened due to the time it took Curiosity's signal to travel from Mars to Earth.

Just minutes after the signal arrived that the landing had gone off successfully, Curiosity beamed back its first black-and-white thumbnail image of Mars. Soon after, a bigger image — 256 by 256 pixels large — showed up onscreen at the laboratory.

"There is the wheel of the rover safely on the surface of Mars," an out-of-breath mission manager at NASA's Jet Propulsion Laboratory in Pasadena, Calif., said on NASA TV.

The images were greeted by loud celebration from the dozens of scientists and engineers gathered to monitor the landing.

"I can't believe this, it's unbelievable. This is amazing," the mission manager said.

The photos were taken by Curiosity's rear hazcam (short for Hazard Avoidance Camera), which will be used by the rover to avoid hazards on the planet's surface while navigating.

"It's just absolutely incredible," NASA administrator Charles Bolden said of the images. "It doesn’t get any better than this."

Curiosity is now due to begin a two-year mission to search for signs that Mars is, or ever was, habitable to life. The rover will explore the Red Planet's huge Gale Crater, a site scientists say is particularly rife with scientific potential.

More photos and updates from the newly arrived rover are expected to arrive in the coming days as Curiosity gets its bearings and fires up its 10 onboard instruments.