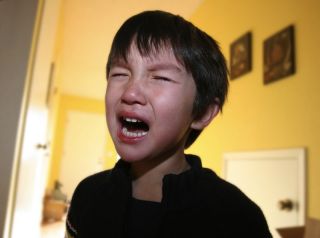 A new study published in the journal Behavior and Social Issues finds that kids spank and otherwise physically discipline their children in public quite frequently.
(Image: © Christophe Testi, Shutterstock)

Parents get physical with unruly children far more in public than they do when they know psychologists or other researchers are looking, a new study finds.

In an experiment that involved surreptitiously watching parents discipline their kids in public places such as restaurants, researchers found that in 23 percent of cases, mom or dad resorted to "negative touch" to get their child to comply. Negative touch can include anything from restraining and spanking to pinching and hitting.

The findings suggest that most social science research in parenting misses out on these sorts of incidents, study researcher Kathy Stansbury, a professor of human development and family studies at Michigan State University, said in a statement.

"I have also seen hundreds of kids and their parents in a lab setting, and never once witnessed any of this behavior," Stansbury said.

There is plenty of controversy in parenting circles about whether physical discipline, especially spanking, is ever okay. Stansbury and her colleagues didn't delve into that debate, which mostly focuses on the long-term effects of spanking. Instead, they were interested in the immediate effects of touch in discipline.

Previous studies have found that positive touch, such as tickles, hugs, pats and gentle guidance are associated with happy outcomes (and good behavior) in young children. Negative touch, including spanking and hitting, has been linked to more aggression in some kids.

But people aren't always willing to admit they've spanked or otherwise been physically rough with their child. So Stansbury and her colleagues set themselves up in restaurants, shopping malls, parks and other public spots to watch parents and kids ages 3 to 5 interact naturally. The study subjects never knew they were being observed.

The researchers watched 106 public caregiver-child interactions that involved a child refusing to comply with a request and the caregiver having to correct the child. In most cases, the caregivers appeared to be the child's parents, but because the researchers never approached the families, they can't be sure.

"If your child is upset and not minding you and you want to discipline them, I would use a positive, gentle touch," Stansbury said. "Our data found that negative touch didn't work."

The researchers detailed their findings in the journal Behavior and Social Issues.