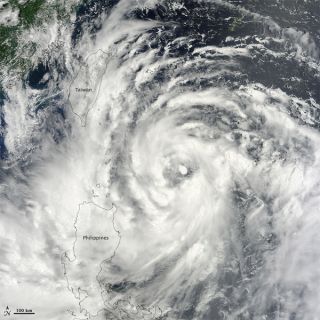 The Atlantic and East Pacific basins have been quiet when it comes to storms over the past week, but the western Pacific Ocean has seen more action.

NASA's Terra satellite snapped this image of Typhoon Saola near Taiwan and the Philippines today (July 30).

Saola first formed as a tropical depression on July 28 and had strengthened into a typhoon (the same phenomenon as a hurricane) by today. The U.S. Navy's Joint Typhoon Warning Center (JTWC) reported that the storm had maximum sustained winds of 75 mph (120 kph) with gusts up to 92 mph (150 kph).

The JTWC has forecasted that Saola could pack sustained winds of 120 mph (194 kph) — the equivalent of a Category 3 hurricane in the Atlantic — within the next 48 hours. The forecasted path has the storm moving to the northwest, past Taiwan and towards southeast China.

The storm has already caused flooding and power losses in the Philippines, according to news reports.