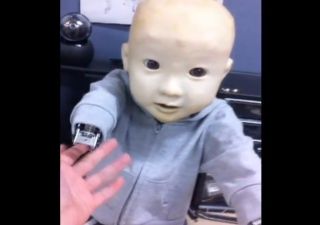 A Japanese robot evolves from skeletal Terminator baby to full-fleshed android in our latest installment of "Uncanny Valley Watch." Which one is scarier?

Japanese researchers at Osaka University's Asada Lab have built the "Affetto" robot in their attempt to make the most realistic baby robot ever, according to robot blog Plastic Pals. Their efforts land easily within the realm of the so-called uncanny valley — the sensation described by Japanese roboticist Masahiro Mori in the case of objects that resemble incomplete humans based on behavior or appearance.

The Affetto robot reduced to its mechanical innards can create a vague sense of unease because of its eyeballs set inside a machine-like head and body. But the "skeletal" robot also comes off as more of a machine than an incomplete, broken human being because it avoids any overly human appearance or behavior.

(Affetto achieves one particularly dopey moment when it whacks itself in the face like an uncoordinated human infant.)

By contrast, the fully fleshed out android version of Affetto looks more like a realistic baby doll come to life with dead eyes and limited facial expression. That looks very much more "uncanny" than the mechanical Affetto. But perhaps the creepiest moment comes from putting baby clothing over the mechanical version — a simple juxtaposition that sets up our brains for the fall into the uncanny valley.

On a scale where "1" means adorable and "5" means creepy, the Affetto android earns a "2" in its mechanical form, a "3" in its full android form, and a "4" in its clothed Terminator baby incarnation.