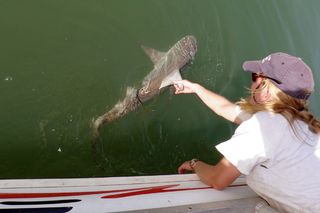 A human hunger for shark fin soup, fisheries and other human-related activities threaten sharks worldwide, but researchers have identified one place where sharks appear to rule, living out their lives in tropical splendor.

The location, Cleveland Bay, is a coastal habitat located within the Great Barrier Reef Marine Park on the northeast coast of Queensland, Australia. The bay is home to numerous different shark species, but the study, which will be published in the August issue of Fisheries Research, focused primarily on two: pigeyes (Carcharhinus amboinensis) and spottails (Carcharhinus sorrah).

NEWS: Chum Boy! How to Call a Shark

Sharks at Cleveland Bay are doing so well, according to lead author Danielle Knip, because of the success of two large Conservation Park zones established in the region.

"These zones are part of the network of Marine Protected Areas within the Great Barrier Reef Marine Park and prohibit commercial fishing activities, such as trawling and gillnetting," Knip, a researcher at James Cook University's Fishing and Fisheries Research Centre, told Discovery News. "Therefore, shelter from fishing pressure likely plays a large role in the low mortality rates for these species at this location."

"The Conservation Park zones may also have protective benefits for prey species," she added, "which could result in pigeye and spottail sharks having enough food to eat in Cleveland Bay."

Knip and colleagues Michelle Heupel and Colin Simpfendorfer measured and tagged multiple juvenile pigeye and adult spottail sharks in the bay. The scientists also outfitted each shark with a transmitter, which sent out data every six to eight weeks over a period of two years -- the battery life of the transmitters.

The researchers investigated these two sharks because they have such varying characteristics. Pigeyes are slow growing and large bodied. Maximum longevity is about 30 years.

Spottails, on the other hand, are fast growing, medium-sized sharks that live approximately 14 years.

Mortality was low for both sharks over the study period, despite the life stage differences. Body size was comparable, however, suggesting that this factor may play a greater role than age in the mortality rates for some shark species.

The sharks spent the majority of their time in Cleveland Bay, which features water less than 33 feet deep in most places and a maximum tidal range of less than 14 feet.

Knip said that "strategies such as using shallow water may help the sharks in the study to avoid predators themselves and decrease predation risk." Larger sharks, such as hammerheads, are the probable hunters of the smaller sharks.

The researchers further believe that, aside from the food chain hierarchy and hunting, the sharks at Cleveland Bay can coexist because they use very different areas within the water, "which means that they would not have to compete with each other for resources," she said.

Other marine life in the bay includes blacktip sharks, hammerheads, giant shovelnose rays, dugongs, dolphins, sea turtles, sea snakes, saltwater crocodiles, and a diversity of fish species. The sharks in the study are believed to primarily feast upon crustaceans, fish, and cephalopods.

John Carlson, a research fisheries biologist for NOAA's National Marine Fisheries Service, told Discovery News that he agrees with the conclusions of the new study. He, however, said that "the study may be specific only to juvenile pigeye and adult spottail sharks in Cleveland Bay. It should not be considered to apply to all juvenile shark species in all areas until further studies are conducted."

In other regions where pigeyes and spottails live, fishermen often target these sharks. The sharks wind up in markets, either fresh or dried and salted, ready for someone's dinner table.