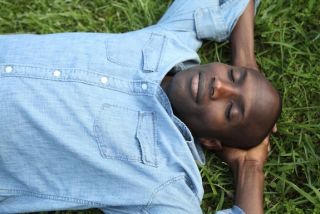 Scientists have just found an easy, relaxing way to boost memory: Close your peepers for a quick rest.

After learning something new, a wakeful shut-eye may seal that information into your brain.

"Our findings support the view that the formation of new memories is not completed within seconds," Michaela Dewar, a psychologist at the University of Edinburgh in Scotland, said in a statement. She added that the study suggests "activities that we are engaged in for the first few minutes after learning new information really affect how well we remember this information after a week."

In the study's two experiments, a total of 33 elderly adults ages 61 to 87 listened to two short stories, with instructions to remember as many details as possible from each. Next they described what happened in each story. That was followed by a 10-minute period in which the participants either took a wakeful rest or played a spot-the-difference computer game.

Participants in the "wakeful rest" condition were asked to rest quietly with eyes closed in a dark room. The researchers said it didn't matter what the participants did during this rest (they could daydream, think about the stories, make a grocery list…); the important part of this stint was that they weren't distracted by anything external and didn't receive any new information. [10 Ways to Keep Your Mind Sharp]

The spot-the-difference game, in which the participants had to call out two subtle differences in pairs of pictures on a screen, was chosen because it required attention but wasn't verbal. (Verbal processing could interfere with the recently acquired memory of the two stories.)

In one experiment, participants had to recall details of both stories 15-30 minutes after the 10-minute delay and again seven days later. Adults in the wakeful-resting group remembered much more about the stories, even a week out, than the other group of participants. To see if the recall test given at 30 minutes was responsible for the results rather than (or in addition to) the wakeful rest, the researchers ran another experiment.

In this one, participants just had to recall the details of the stories a week later. Again the resting group remembered significantly more story details a week out than did the other group of adults.

The researchers suspect that during this 10-minute wakeful rest the brain is consolidating the recent memories, a process in which the brain seals experiences into long-term memory. Without this memory consolidation, a person may forget this information, being unable to pull it up at a later point.

The bottom line: In a world where we're bombarded with crazy amounts of new information, the best advice for holding onto these memories is a little peace and quiet.