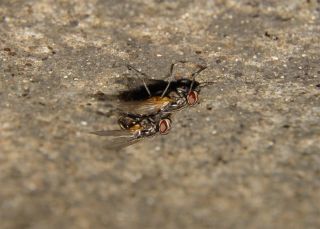 When houseflies have sex, she spreads her wings and the male flutters on top of her, producing clicklike sounds.
(Image: © Stefan Greif/MPI for Ornithology)

Flies may not scream out in ecstasy during sex, but they do create quite a buzz with their wings. And now researchers have found these mating moans can be heard by bats hungry for a meal.

The result: Wild Natterer's bats get a double-size meal of copulating flies; the mating flies, rather than offspring, get death.

In the study, detailed this week in the journal Current Biology, Stefan Greif from the Max Planck Institute for Ornithology in Germany and colleagues found bats didn't seem to notice the flies walking on a ceiling or just sitting. That suggests there's something about mating sounds that outs the flies to bat predators.

The researchers said this is one of very few studies to show that copulating animals are at a higher risk of being eaten by predators. Other examples include studies on amphipods, water striders and other aquatic insects, as well as land insects like the Australian plague locust.

In a cowshed in Marburg, Germany, the researchers video-recorded the movements of 9,000 houseflies over four years. Results showed the flies rarely fly at night, when they mainly sit or run on the ceiling; the faint, lower frequency, noise made by these movements, it seems, was drowned out by a strong background echo. [The Animal Sex Quiz]

"The faint insect echo [of non-mating flies] is fully overlapped and masked by massive echoes from the background," the researchers write.

When houseflies mate, the female spreads her wings while the male flutters on top of her, a fluttering that probably is responsible for his broadband clicklike sounds. The mating noise makes the fly pair "visible" to the bats. In the study, about 26 percent of fly pairs that were engaged in sex were attacked by bats — and more than half of these were eaten.

To be sure the mating sounds really did lead bats to their fly meals, the researchers mounted dead (and, as such, noiseless) fly pairs in a typical sex-act position on the shed ceiling. Since these two flies together mean more surface area for sound to reflect off of compared with a single fly, the researchers wondered if this magnification was what drew in the bats. However, bats never attacked the dead flies; it was only when the researchers played back sex calls of the flies did the bats attempt to attack the loudspeakers.