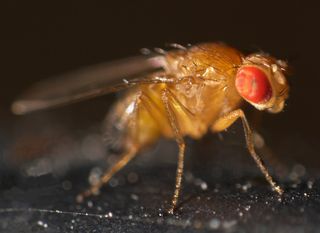 Humans have been searching for that sexually arousing aphrodisiac for centuries. Now, researchers have finally found the first true aphrodisiac, but alas, it only turns on fruit flies.

While other substances, such as chocolate and oysters, have been thought of as aphrodisiacs, these claims have failed every scientific test.

The new study found that the scent of ripe and rotting fruit gets fruit flies called Drosophila melanogaster in the mood by turning on courtship-initiating brain pathways. These pathways, or networks of connected neurons, had previously been discovered to encourage fruit-fly males to engage in courtship displays and start mating. But scientists hadn't known that fruit smells could activate the pathway.

"This is one of the first cases of a food aphrodisiac, a specific sensory pathway in the olfactory [smelling] system that triggers sexual behaviors," study researcher Richard Benton, of the University of Lausanne in Switzerland, told LiveScience. "This is the key compound that is regulating the courtship behavior." [Top 10 Aphrodisiacs]

The researchers discovered this pathway while they were studying the sense of smell in Drosophila brains. They discovered that one of the pathways they had associated with smell had already been discovered and was thought to regulate sexual behaviors.

A closer look at the pathway revealed that something the fly smells activates the pathway, which then causes courtship behaviors.

"This is a sensory pathway that couples the presence of food odors in the environment with sexual behaviors," Benton said.

They found that phenylacetic acid and phenylacetaldehyde, which are found in ripe fruits and vegetables of all kinds, were the specific smells that activated the pathway. To humans, these chemicals have a sweet, honeylike smell.

Sadly for male flies everywhere, knocking out this pathway in females didn't seem to change their mating habits, suggesting the fruity smells don't have aphrodisiac effects on the ladies. But because the males are encouraged to court and mate near these fruits, the females end up laying their eggs there.

"This suggests that this is a real biological mechanism where the flies can mate during a feeding environment, a good place to have sex and then make baby flies," Benton said. "It also raises the question whether other organisms have similar sensory pathways."

"It's very nice work and an exciting and intriguing finding," said Barry Dickson, a researcher from the Institute of Molecular Pathology in Vienna, Austria, who wasn't involved in the study.

The study will be published in the Sept. 29 issue of the journal Nature.