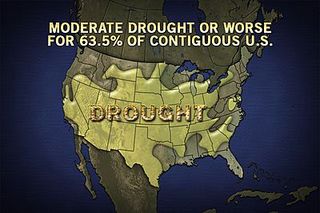 The fifth worst drought and one of the hottest summers on record is already taking its toll on agriculture and consumers. The biggest impacts may be yet to come.

The drought is making its way up the ladder from a historical perspective in the amount of real estate. As of July 19, 2012, about 64 percent of the lower 48 states was experiencing moderate or more extreme drought conditions.

Dozens of all-time record high temperatures have been set this summer and the season is currently on pace to be the third hottest summer since 1950.

The drought and heat this summer are impacting some people more than others. However, either directly or indirectly it is or will eventually touch just about everyone.

Heat-Related Illness Dozens of fatalities have already occurred in the U.S. this summer due to the extreme heat. As the heat continues, the toll will continue to mount.

The heat remains a big concern for young children, the elderly, folks with respiratory problems and anyone partaking in strenuous physical activity.

In weather like this your vehicle can become a death trap in minutes for young children left inside.

Heat can build up in enclosed dwellings over a period of days. Be sure to check on the elderly.

Every year it seems there is some sort of preventable heat-related health issue at sports camps. Coordinators of upcoming sports camps through August may want to skew the hours away from the midday and afternoon, when temperatures and the sun intensity are greatest.

As a lack of rain continues over a large part of the nation, water tables will continue to drop. While this is a normal occurrence in the summer and fall, the extreme heat and lack of rain may have more serious consequences this year.

Mandatory water restrictions could be put in place in more communities and some wells may run dry.

Low river levels on the Mississippi River basin are already causing issues for barge traffic. While dredging operations continue to keep the channel open, there is the potential for reduced profit caused by reduced traffic and smaller loads and higher costs from dredging operations.

Fishing and other recreational activities can be negatively impacted more seriously moving forward in the heart of the drought area over the Plains and Midwest.

Agriculture The combination of heat and drought during the corn pollination period already cut into anticipated production for the 2012 crop. Ongoing heat and lack of rain was cutting into areas that survived the onslaught and will continue into August and beyond.

Reserves of corn from last year will cushion the blow from yields lower than originally expected this year in terms of price increases for animal feed and human consumed products. However, if another big drought was to hit the Corn Belt next year, with reserves depleted by that time, the fallout could be devastating not only to farmers but consumers.

Soybeans are next on the list of worries among agricultural meteorologists and farmers. While some rain has fallen just in the nick of time and additional rain is expected to reach a portion of needy locations through the critical time in mid-August, devastating drought and heat will continue in soybean areas over much of the Midwest.

Reserves for soybeans is currently relatively lower than compared to corn.

Heat is stressing both dairy and beef cattle and other animals, while drought has dried up pastures.

Dairy cows give less milk as temperatures rise, hence tightening the supply. According to ABC News, milk prices are likely to rise sooner rather than later as a result.

As the pastures dry up, farmers have to buy more hay and feed. The prices of which are much higher, due to the drought.

Some ranchers must then sell off their herds or butcher more cattle to survive. This may initially lower beef, pork and poultry prices, but with lower livestock available later, prices are likely to then rise for meat.

Since the U.S. is a great exporter of food throughout the world, lower exports of corn and soybeans bring the potential that food may become too expensive for some third-world populations.

According to the the Christian Science Monitor, there is the potential that lower food exports from the U.S. could indirectly strain water supplies in arid nations.

Higher Electric and Water Bills As the temperature climbs, most people turn to fans and air conditions to keep their homes and workplaces cool. Generally, the hotter it is, the higher your electric bill will be.

The air-conditioning repair man is likely to remain busy as some systems are taxed by the relentless, excessive heat.

The time and gas money you save by not cutting the grass, may be spent on watering it.

If you do water, do so first thing in the morning or during the evening, when evaporation rates are lower. It is generally better to thoroughly soak the garden once every few days rather than spritz every day. This encourages deeper root systems and less wilting in between.

Less Lawn Mowing Some of the money spent on higher electric bills is being saved in terms of time and energy in lawn care for many. The grass simply goes dormant and stops growing when the rain ceases.

However, pay per cut lawn care operations may struggle to survive in these situations, unless they have a season-long contract in place.

Some of the same operations plow snow in the winter. For these outfits it has been a double whammy with the lack of snow last winter and the lack of lawn cutting this summer.