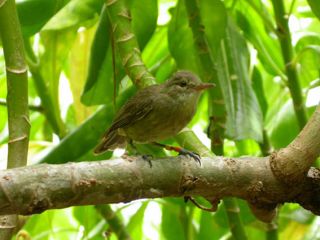 Just as Nana and Papa help take care of the kids, senior birds have now been seen for the first time behaving like grandparents.

The new findings could shed light on how grandparenting — rare in the animal kingdom except in humans — develops.

In a very small number of mammal species other than humans — such as pilot whales and some monkeys — researchers have occasionally seen older adults engage in what might be grandparenting. Still, this behavior remains largely overlooked outside humans, explained molecular ecologist David Richardson of the University of East Anglia in England.

For more than 10 years, Richardson and his colleagues have investigated the Seychelles warbler (Acrocephalus sechellensis), once one of the world's rarest birds due to human interference. Conservation efforts have now helped rescue this tropical songbird from the edge of extinction.

The small island the researchers worked on is also the nesting site of half a million seabirds. The constant rain of bird droppings "means a hat is a must!" Richardson recalled. In addition, "although the island is incredibly beautiful, it can also be full of mosquitoes, especially in the jungle. In some wet years you would be lucky to get away with 300 to 400 bites a day. Fortunately, there is no human malaria, so it is not life threatening."

Now the researchers find that, as in humans, older adult birds that no longer breed often help their children to rear their young. This helps the grandparents protect their genetic legacy, Richardson suggested.

Suitable territory for breeding on the islands is limited, so older adults typically stop breeding there. The researchers discovered that roughly two-thirds of such older female Seychelles warblers helped their daughters raise offspring by incubating eggs or feeding nestlings.

"Because the subordinate females are helping to raise offspring they are related to, they are helping to produce more birds and increasing the spread of their genes," Richardson said. "This has never been seen in birds."

The researchers now want to look into why some females keep breeding and why others seem to lose their breeding rights only to become grandparent helpers.

These findings could shed light on the conditions required for grandparenting behavior to evolve. "By having a different system to compare and contrast to the human system, we may better understand what factors drive the evolution of each system," Richardson told LiveScience.

Richardson and his colleagues detailed their findings in the December issue of the journal Evolution.