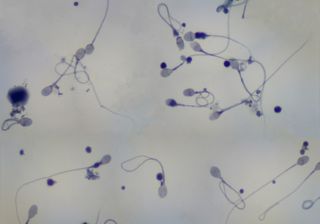 For the first time, researchers have sequenced the entire genome of the human sperm cell.

The findings, reported today (July 19) in the journal Cell, may help researchers understand the genetic mixing that ensures that babies end up with an even blend of DNA.

A new understanding of the sperm genome may have "far-ranging implications for the study of cancer, infertility and many other disorders," study researcher Stephen Quake, a bioengineer at Stanford University, said in a statement.

Quake and his colleagues sequenced the genomes of 91 sperm cells from a 40-year-old man with a healthy semen sample and normal children. They found a surprising level of variability between the cells. For example, two of the sperm cells were missing entire chromosomes.

Gametes --  egg cells and sperm cells -- hold half of the amount DNA found other cells of an organism. A human cell has 23 pairs of matched chromosomes, or bundles of DNA; sperm and egg cells have 23 single chromosomes.

The most taboo elements of society are also the most misunderstood, and sex is no exception. Here we test you on the marvels of procreation (psst - babies do not come from storks) and attempt to put some of the wildest myths to bed.

To ensure an even blend of genes from both sets of parents (and, in turn, from all four grandparents), gametes go through a process called recombination. During recombination, DNA strands can break apart and join new strands, creating new mixes of genes.

Until now, researchers have been limited to studying the genes of large groups of people to estimate how much recombination occurs in gametes. But in the new study, the researchers were able to compare the man's sperm cells to his body cells, with their full compliment of DNA.

They found that recombination occured 23 times, on average, in the sperm cells. Some cells had more recombined genes more than others, however, and the rate of genetic mutations between cells varied widely, the researchers reported. They identified between 25 and 36 single-nucleotide mutations in each sperm cell. Some of these mutations could be beneficial, others could be harmful or even deadly to an embryo.

"Now, we can look at a particular individual, make some calls about what they would likely contribute genetically to an embryo and perhaps even diagnose or detect potential problems," study co-author Berry Behr, a professor of obstetrics and gynecology at Stanford, said in a statement.