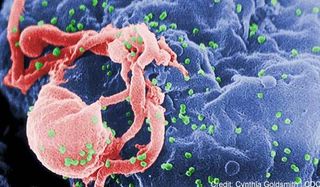 Becoming infected with both of the two main types of HIV actually slows the progression of the disease, a new study says.

HIV-1 is more common and more virulent than HIV-2, which is confined largely to West Africa.

The findings suggest that HIV-2 infection hinders the advancement of HIV-1 disease, and future studies of exactly how this might work could aid in the development of HIV-1 vaccines or other therapies, the researchers said.

Previous studies in cells have suggested HIV-2 may inhibit HIV-1 progression, but rigorous studies investigating the effect in people have not been conducted.

In the new study, Joakim Esbjörnsson of Lund University in Sweden, and colleagues analyzed information from members of the police force in the West African country Guinea-Bissau between 1990 and 2007. Participants periodically gave blood samples, which were tested for HIV infection.

During the study period, 223 participants were infected with HIV-1, and 32 of these people also tested positive for HIV-2.

It's not clear how HIV-2 could interfere with HIV-1 disease progression, the researchers said, but it's possible the immune responses to HIV-2 may also play a role in controlling HIV-1.

If researchers can figure out exactly how the inhibitory effect works, and how to trigger it, "There is a great potential that these mechanisms can be used as targets and aid in the development of new HIV interventions and vaccines," Esbjörnsson told MyHealthNewsDaily.

Although the work is preliminary, it is even possible that components of HIV-2 could be useful in an HIV-1 vaccine, Esbjörnsson said.

The study is published today (July 19) in the New England Journal of Medicine.

Pass it on: One type of HIV may interfere with the progression of the other.