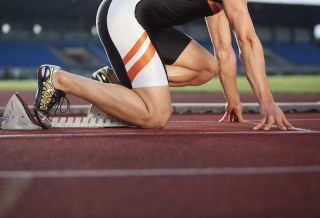 A sprinter readies for a race.
(Image: © Peter Bernik, Shutterstock)

Will the Olympics as we know it survive genetic engineering?

That seems to be the question behind a new opinion piece in this week's journal Nature. As scientists uncover the genes that help people become world-class sprinters or record-breaking skiers, the idea that medals are won with just hard work, sweat and tears begins to feel outdated, according to the authors.

"When you start sequencing [the genes] of lots and lots of human beings, what we're going to find out is that we're more different than people had realized," said Steve Gullans, a managing director of Excel Venture Management in Boston, who co-wrote the piece with his colleague Juan Enriquez.

Already, Gullans said, DNA tests have shown that some Olympic athletes have distinct advantages. Finnish cross-country skier and seven-time Olympic medalist Eero Mäntyranta, for example, carried a mutation in his EPOR gene that meant he produced up to 25 percent more red blood cells than the norm. That mutation gave Mäntyranta an edge because his blood carried more oxygen than the blood of people without the mutation, Gullans told LiveScience. And that raises the question of whether "gene doping," or gene therapy to improve performance, should be banned.

"If someone else is carrying the EPOR receptor that I don't have, why shouldn't I be able to give it to myself to play on an equal playing field?" Gullans said. [7 Amazing Superhuman Feats]

The genome and the Olympics

Gene doping has been banned by the International Olympic Committee since 2003, though the actual therapies that could boost athletic performance remain largely theoretical. Nevertheless, gene therapy is becoming more common, raising new questions, Gullans said. Suppose scientists invented a gene-therapy procedure to cure sickle-cell anemia in babies, he said. Would a child who received the treatment forever be banned from the Olympics?

As the rules are written today, they likely would, Gullans said. The World Anti-Doping Agency rules prohibit "the transfer of nucleic acids or nucleic acid sequences" and "the use of normal or genetically modified cells" if those methods have "the potential to enhance sport performance."

This prohibition is much broader than the ban on drugs, which are split into performance-enhancing and allowed categories, Gullans said. It's likely that officials will have to grapple with a number of ethical gray areas as genetic manipulation advances.

Another example: Imagine that a genetic treatment could slow aging, so that people stayed healthy and youthful until after they were 100 years old, Gullans said. Would Olympic athletes be the only people forced to abstain?

Genetic engineering and the rest of us

Many of the genes that confer athletic performance are common. The 577R allele of the gene ACTN3 has been found in almost every male Olympic sprinter tested — but it's also in about 85 percent of Africans and 50 percent of Europeans and Asians, for example.

What Gullans, a former Harvard Medical School professor, expects to see, however, is a faster of discovery of very rare genes — variations that, by themselves, have a huge impact on performance. Such discoveries could change the world of even childhood sports, Gullans said.

"Imagine your son was carrying a variant that a great baseball player also had, and was known to improve performance," he said. "We will have that information, and it will be in the hands of parents. If you talk about ethics, that's the one that concerns me actually — not 'What will I do to myself?' but 'What will I do to my kids?'"

At the very least, Gullans said, the IOC will have to take a hard look at their rules. Athletes could find themselves in a world where handicaps are assigned based on genetics, or perhaps where the Olympics are splintered into parallel competitions, some that allow doping and others that don't.

"These tools wil be available," Gullans said. "They will become a part of everyday life."