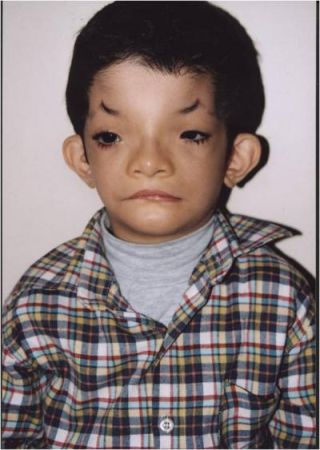 A single genetic mutation seems to cause the abnormal facial features and other defects that come along with Hamamy syndrome, a rare disorder. The work lends new insights into common ailments such as heart disease, osteoporosis, blood disorders and possibly sterility.

"We believe that this discovery could open up new therapeutic solutions to common diseases like osteoporosis, heart disease, anaemia which affect millions of people worldwide," study researcher Bruno Reversade, of the Institute of Medical Biology in Singapore, said in a statement.

"The findings also provide a framework for understanding fascinating evolutionary questions, such as why humans of different ethnicities have distinct facial features and how these are embedded in our genome. IRX genes have been repeatedly co-opted during evolution, and small variation in their activity could underlie fine alterations in the way we look, or perhaps even drastic ones such as the traits seen in an elephant, whale, turtle or frog body pattern," Reversade said.

The findings were published yesterday, May 13, in the journal Nature Genetics.

Rare genetic diseases, usually caused by mutations in a single gene, provide a unique opportunity to better understand more common disease processes. These "natural" experiments are similar to carefully controlled lab experiments in which the function of single genes are analyzed and often give major insights into general health issues.

Hamamy syndrome is one of these rare genetic disorders, and is marked by abnormal facial features and defects in the heart, bone, blood and reproductive cells. Only a handful of people in the world have been identified with Hamamy syndrome making it a very rare genetic disorder. Its exact cause was unknown until researchers pinpointed the genetic problem, in their recent paper, that produces the disease to be a mutation in a single gene called IRX5.

This is the first IRX5 mutation discovered in man. IRX5 is part of a family of proteins that is highly similar in all animals. Using a frog model, the scientists demonstrated that the protein made by the IRX5 gene orchestrates cell movements in the head and genitals of the developing fetus.

"Because Hamamy syndrome causes a wide range of symptoms, not just in newborn babies but also in the adult, this implies that IRX5 is critical for development in the womb as well as for the function of many organs in our adult body," study researcher Carine Bonnard, a graduate student at the Institute for Medical Biology, said in a statement.

"This discovery of the causative gene is a significant finding that will catalyze research efforts into the role of the IRX gene family and greatly increase our understanding of human health, such as bone homeostasis, or gamete formation for instance."