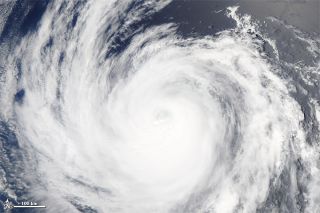 Fabio began as a tropical depression on July 12 and rapidly strengthened into a tropical storm, becoming the sixth named storm of the 2012 season for the East Pacific basin. Named storms include tropical storms and hurricanes.

At the time it formed, Fabio was following in the footsteps of Daniel and Emilia, the third and fourth hurricanes of the season. All of these storms have followed roughly the same path, forming off the west coast of Mexico and moving westward far out to sea. Before Fabio became a named storm, all three storms were imaged over the Pacific by a NASA satellite.

Hurricane Fabio currently has maximum sustained winds of 75 mph (120 kph), making it a Category 1 hurricane on the Saffir-Simpson scale of hurricane strength. Fabio is expected to weaken and become a tropical storm later today as it moves over cooler ocean waters.

Fabio is located about 700 miles (1,130 kilometers) west-southwest of the southern tip of Baja California. The storm is not a direct hazard to land, but it is stirring up swells that could cause dangerous rip tides and surf along Baja California's west coast, according to the latest update from the U.S. National Hurricane Center.

While the East Pacific has been alive with storm activity in the last couple weeks, the Atlantic basin has been quiet. Four named storms have formed in the Atlantic this season, two of which spun up before the official June 1 start to the season. The Atlantic has seen only one hurricane so far.

The 2012 Atlantic hurricane season is forecasted to be a normal one, with 15 named storms (tropical storms and hurricanes), with between or to eight hurricanes. The busiest months of the season are typically August and September.