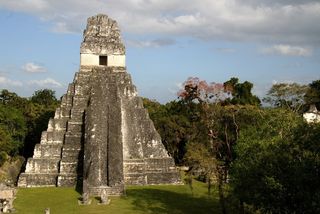 A temple in the Maya city of Tikal, where a complex system of reservoirs met the water needs of the growing population.
(Image: © Zap Ichigo, Shutterstock)

For four months out of every year in the ancient Mayan city of Tikal, the skies dried up and no rain fell. Nevertheless, this metropolis in what is now Guatemala became a bustling hub of as many as 80,000 residents by A.D. 700. Now, researchers have found that the residents of Tikal hung on to their civilization for more than 1,000 years thanks to a surprisingly sustainable system of water delivery.

The water needs of Tikal were met by a series of paved reservoirs that held rainwater during the 8-month-long wet season for use during dry periods, archeologists report Monday (July 16) in the journal Proceedings of the National Academy of Sciences. This early plumbing system was surprisingly resilient, seeing the city through times of both plenty and drought.

"These people were able to use their land and water resources in a sustainable manner for as long as 1,500 years without significant interruption," said study researcher Vernon Scarborough, an anthropologist at the University of Cincinnati.

Scarborough and his colleagues have been excavating the reservoirs, canals and sluices that once directed water from the crest of the hilly city of Tikal to the residents below. The story they've uncovered is one of gradual technological advances. [How Weather Changed History]

People first moved into Tikal around 500 B.C., Scarborough told LiveScience. These early colonists depended on natural springs for their water needs. As the population grew, this water wasn't enough. So Tikal residents excavated out natural arroyos, or gulches, and paved them to prevent the ground from absorbing precious rainwater. They then transformed into reservoirs the quarries from where they'd pulled stones for their temples and homes.

"Everything at Tikal was covered with plaster," Scarborough said. "When it rained, the water would flow through to these great big quarry scars."

These reservoirs could hold thousands of gallons of rainwater, the archeologists found. One of the largest, the Palace Reservoir, held up to 19,715,424 U.S. gallons (74,631 cubic meters).

The creation of this water-delivery system covered over the natural springs, but did not necessarily destroy them — diggers at the site even discovered one of the ancient springs while excavating an old reservoir and used it to fill their canteens, Scarborough said.

The loss of the springs brought with it a loss of the natural filtration of soil and sand, however, so the Maya built their own primitive filtration systems, forcing their rainwater runoff through boxes of sand, the researchers found. This would have cleared out major debris, Scarborough said, but city dwellers likely had to boil their water or use it to make alcohol in order to make it safe to drink, as sanitation was not up to modern standards.

The Maya are well-known for their complex calendar system, which some say predicts the end of the world in December 2012 (an interpretation that experts on the civilization call absurd). But the Maya's own fate was sealed by the weather. Eventually, a growing population and an increasing level of drought spelled the end for Tikal. The city peaked in population by A.D. 700, and by A.D. 900, "the show is over," Scarborough said.

Nonetheless, modern people may be able to take lessons from the long-lived Tikal technology, he said. In developing nations where water and energy are scarce, simple solutions may work better than new, costly technologies that are prone to break, Scarborough said. Looking at history can also reveal the consequences of certain water strategies, he added.

"It is as sound an approach to improving the well-being of our planet at the ground level, with everyone benefitting, to use these archeological analogues than it is to invent another technology that has unintended consequences," Scarborough said.