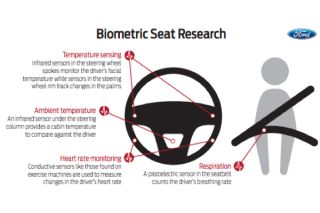 The evolution of cruise control led to adaptive cruise control, which enables drivers to maintain a safe distance behind a vehicle in front based on the leader's variable speed, and in some cases to do this all the way to a stop. Now, Ford Motor Co. says it is working on the next step beyond this––an adaptation of adaptive cruise control and related technologies that will keep the car moving the same way in a traffic jam––along with other car tech innovations aimed at reducing driver stress levels and letting the car take on even more of the driving task than it can already.

Ford’s new auto tech includes, for example, a system that could warn a driver about an impending collision sooner if it senses that the driver is tired, giving him more time to respond, and an automatic perpendicular parking system that complements the automatic parallel parking system available from Ford and other automakers today. [Why America's Love Affair with Cars Is No Accident]

How it all works:

•   Active park assist for perpendicular parking uses the vehicle's rear parking distance control sensors to monitor obstructions not seen by the driver while it automatically backs the vehicle into a parking space.

•   Workload Estimator "health and wellness" monitoring technology uses biometric feedback sensors––such as heart rate and body temperature sensors built into the steering wheel and a breathing rate sensor built into the driver's seatbelt––as well as a cabin temperature sensor, plus data gleaned from the sensing systems of the car's driver-assist technologies, to figure the driver's cognitive workload (his mind's ability to deal with everything going on around him). Thus, for example, if the driver is cognitively stressed or otherwise health-impaired while merging into a congested highway, the car may dynamically adjust the alerts it sends and also autonomously block incoming cellphone calls or text messages that could be dangerous distractions.

Ford says the perpendicular parking system should be available within the next couple of years, and the traffic jam assistant is expected to debut within the next five years. The stress monitoring system is still in Ford's research and development labs with no release date anticipated currently.

To be sure, Ford isn't the first automaker to announce a "traffic jam assistant" technology. In 2010, Mercedes-Benz announced a prototype technology called "DISTRONIC PLUS Traffic Jam Assistant" in its F800 Style research vehicle and said this was the first such system capable of steering a car into curves, at speeds up to 25 miles per hour. The company has not announced any plans to bring it to market, however.

Audi, at the 2012 International CES last January, revealed a similar prototype traffic jam assistant that works at speeds up to 37 MPH and can monitor traffic two cars ahead. It may be available first in the next-generation Audi A8, which is expected to be at dealerships late in this decade, an Audi spokesman says.

Additionally, BMW last year announced a Traffic Jam Assistant feature that works at speeds up to 25 MPH in the concept of its i3 electric city car, which is expected to go on sale next year. But a BMW spokesman says the company is still deciding whether to offer this feature in the i3 in the U.S.

So, given these other automakers' uncertainty surrounding their own versions' debuts, by bringing its Traffic Jam Assistant to market by 2017, Ford may ultimately be leading with this technology on the road––at least in the U.S.