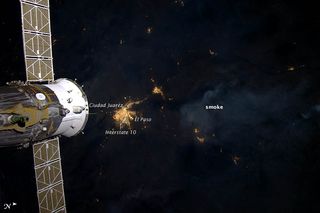 In this photo taken on June 2, 2012, wildfire smoke can be seen drifting near El Paso, Texas.
(Image: © NASA Earth Observatory)

An astronaut aboard the International Space Station snapped this photo showing ghostly wildfire smoke wafting in the darkness near the neighboring cities of Ciudad Juárez, Mexico, and El Paso, Texas.

The smoke likely comes from the Whitewater-Baldy fire, the largest in New Mexico's history, which has chewed through 465 square miles (1,205 square kilometers) of forests near Glenwood, N.M.,  since it was ignited by lightning on May 16, according to the U.S. Forest Service. The fire is about 225 miles (362 km) to the northeast of El Paso, and is now 87 percent contained.

Winds have carried haze from the Whitewater-Baldy fire and other wildfire smoke as far as the East Coast.

Although it's not possible to distinguish the border of the United States and Mexico in the photo, a line of lights along Interstate 10 —which is slightly north of the border — is visible, according to a release from the NASA Earth Observatory.

The photo was taken on June 2 by an Expedition 31 crewmember using a Nikon D3S, a digital single-lens camera identical to what's available in stores. A Russian spacecraft docked at the space station is visible on the left side of the image.