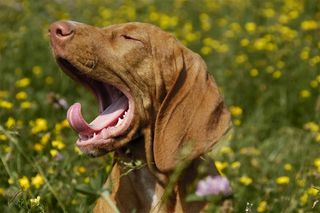 This Hungarian Vizsla is either really sleepy or just spied its owner yawning.
(Image: © Dreamstime.com.)

Dogs catch yawns from their sound alone, new research indicates. They also catch their owner's yawns easier than those from others, supporting the theory that contagious yawns are empathy-based and emotional in nature, the researchers say.

"Unexpectedly, results showed an interesting interplay between contagion and social effects," Karine Silva, of the Universidade do Porto in Portugal, and colleagues write in their study detailed in the July 2012 issue of the journal Animal Cognition. "Not only were dogs found to catch human yawns, but they were also found to yawn more at familiar than unfamiliar yawns."

A link has also been seen in baboons — they catch yawns best from baboons they are closest with. Scientists have found similar phenomena in yawning chimpanzees. Research published in the journal Biology Letters in 2008 indicated that most dogs catch yawns from their owners as well, though other studies questioned this finding.

"Social modulation of contagious yawning, as observed in primate species (gelada baboons and chimpanzees), has been interpreted as supporting the suggestion that catching another's yawn may be an empathic response," the researchers write.

"The idea that dogs, as a domestic species living in close contact with humans, may be capable of some level of empathy toward people is not new."

In the new study, the researchers played several sounds to 29 pet dogs to see their reactions: their owner's natural yawns, a natural yawn from another human, and, as a control, these yawns played backward — which doesn't trigger contagious yawning in animals.

They played the sounds back to the dogs five times consecutively, followed by five seconds of silence. They cycled randomly through the four types of sounds in two sessions, separated by seven days. The testing was done in the pets' homes, and researchers recorded the number of times the dogs yawned. [See What Your Dog Says About You]

Only 40 percent of the dogs tested ended up yawning during the experiment. Eight of the dogs yawned while the human yawning sounds were being played, and one yawned during control sounds. These dog yawns came significantly more often when they were listening to their owner's yawn.

"If it emerges that it is, then giving the growing range of roles being played by dogs in human society (as service and therapy dogs, for example), it could turn out a useful complementary tool for selecting the most appropriate dogs (in terms of empathic processing) for specific tasks."