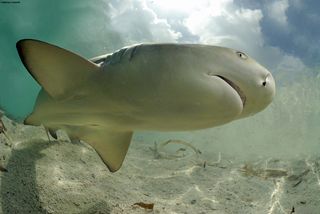 Venezuela has banned shark finning in its waters this week, making it the last country in the Americas to outlaw the practice.
(Image: © Federico Cabello)

Some much-needed good news for sharks has come from Venezuela this week: The South American country announced it is banning shark finning in its waters and has established a new shark sanctuary.

The country became the last in the Americas to outlaw the practice of cutting off the fins of live sharks and tossing the animals back into the ocean to slowly die.

The country also has created a sanctuary where several important shark species breed, outlawing commercial shark fishing there. The sanctuary consists of 1,440 square miles (3,730 square kilometers) of the Caribbean Sea surrounding the Los Roques Archipelago, a popular tourist destination with pristine beaches and coral reefs, according to a statement from the Pew Environment group.

The new set of measures was decreed this week by Venezuela's minister of land and agriculture, according to Pew's senior adviser on global shark conservation, Max Bello.

"It's a very important step to help protect sharks in the area in the near and long term," Bello told OurAmazingPlanet. [Images of the protected sharks]

Protecting their nurseries is important for conserving sharks, said David Shiffman, a University of Miami doctoral student who studies sharks. Sharks spend their first few years of life in these shallow, near-shore waters, where there's plenty of food and few predators. But it's also the point in their lives where they are closest to people and most likely to be caught, Shiffman said.

Sharks are highly susceptible to overfishing because they are long-lived, reproduce infrequently and have few offspring. Scientists estimate that up to 73 million are killed annually for their fins, primarily due to increased demand for shark fin soup, particularly in China and Southeast Asia.

"Scientists and fisheries managers universally agree that shark finning is incredibly wasteful and unsustainable," Shiffman told OurAmazingPlanet. "It also makes the job of fisheries managers harder because they don't know what shark the fins come from."

Various studies have shown that shark fins are unsafe to eat, containing high levels of mercury and a neurotoxin implicated in neurodegenerative conditions called BMAA, or Beta-methylamino-L-alanine.

While Venezuela still permits shark fishing outside the sanctuary, the new rules state that sharks must be landed with fins attached — or, stated another way, any fins brought back must be attached to the rest of the animal.

Scientists have identified Los Roques, located about 80 miles (128 km) off the Venezuelan coast, as an important breeding ground and nursery for several species, including the lemon shark and the Caribbean reef shark, according to Bello. These young sharks grow up to populate the Caribbean and Atlantic Ocean, he said, so measures enacted there can have wide-ranging effects.