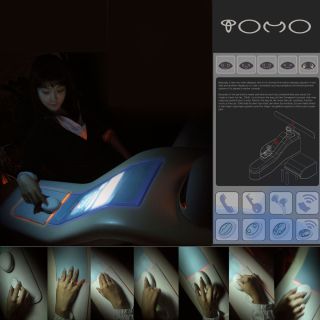 A new user interface for cars could turn your future vehicle into an intimate, nurturing capsule that shows emotions and responds to your moods.

Named after the Tamagotchi digital pet popular in the 90s, the TOMO interface transforms car interiors into interactive environments manned by a listening, perceiving, and emoting "friend." A spherical screen that sits on the dashboard displays five different facial expressions depending on the car's wellbeing, and works in concert with high-tech, emotion-based design to replace dead time and that stressful drive to LaGuardia airport with a personalized oasis.

"When the car is exhausted it makes a sad face, instead of a person looking at a gas gauge. Then you think 'oh he's hungry [for] something, he needs something,'" said Young Joo Tak, a California-based designer whose team won the Gold A'Design Award in Italy for their prototype.

Like a digital pet that cares for you, TOMO uses satellite navigation and in-car wifi to plan routes, predict traffic, and encourage social connection. In the future cars will have IP addresses like computers and will be able to track and link to one another using satellites, Tak said.

A portable, remote-controlled device doubles as a keychain and uses its emotive, digital face to alert the driver to the threat of vandalism or theft at all times, even when the car is off.

A surprised "oh" or look of anger is an endearing way for the car to alert drivers to sudden changes in traffic ahead and possible speeding violations. But more importantly, it's practical for those enjoying the hands-off ride of the coming self-steering vehicles.

"In the future we don't even have to drive," Tak said. "Instead of listening to information or reading the information,” a digital facial expression is the fastest way to communicate with the driver.

Meanwhile, artificial intelligence enables the system to grow smarter as it studies your own face, vocal orders, and travel habits. TOMO can change the car interior's colors and theme on a whim if he thinks the driver is sad.

"Let's say I get in a bad mood, I get in the car. The car starts by itself and says, 'I guess you're not in a good mood.' He creates a bursting in the interior, like spring, butterflies flying around," Tak said. "He knows how I feel."

A touch screen display inspired by Michelangelo's "Creation of Adam" responds to each finger uniquely, triggering the car's power and its entertainment and navigation modes. Made from the same material used in mobile screens, flexible AMOLED films coat the cars' interiors, making them as customized as an iPhone even when they look identical on the outside.

"It's like your secret place. You know how you would store very secret photos in your own computer? You have your own friend. With a friend I may not share secrets because she could burst them out to someone else, but this is a computer I can trust who drives me around," Tak said. "but it's not a computer because it makes decisions and he knows me."

The Fujitsu Ten-Toyota collaboration will release its first model to the market in 2020.