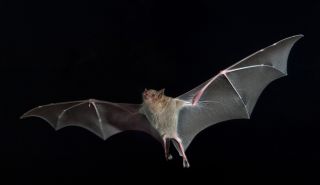 Birds are more aerodynamically efficient when flapping through the air than similar-sized bats, new research suggests. This could be why birds migrate farther than bats.

So what's slowing down the night flyers? Researchers suggest the big ears and special nose shapes of leaf-nosed bats create drag, while the bats membranous wings may also work against them, when they raise their wings.

"If the bird and bat need to fly a certain distance with a certain amount of fuel, the birds can fly faster. If they are flying the same speed the bird can fly farther," study researcher Florian Muijres, of the University of Washington, told LiveScience. "The results sit very well with ecological differences between birds and bats; birds tend to fly farther when they migrate and they fly faster."

Muijres did the research as a part of his graduate work at Lund University, in Sweden. He wanted to see if both fliers were at the top of their game, of if the bats, since they evolved later, were still playing catch up. Both birds and bats are evolutionarily adapted to their efficient flying styles, he found, but because of their solid wings bats will never fly as fast or as far as birds. This could be why birds migrate and bats hibernate.

The birds and the bats

They found that for lift, or the ability to stay aloft, and flight efficiency, or the amount of energy needed for flight, the birds outperformed the bats. If a bird and bat had the same amount of energy and flew at the same speed, the bird would fly 28 percent farther, or, if traveling the same distance, 41 percent faster.

The bats may be trading some of their flying efficiency to carry extra echolocation equipment aboard — for instance their leaf-noses and large ears create drag, but are essential for finding food.

The bats also create negative lift with their wings, basically pushing their bodies downward when they lift their wings back to the starting position; that's because unlike feathers their skin doesn't let air flow through.

Though bats are less efficient than the birds, based on their size and shape both types of aerial animal seem to be performing at the top of their game, the researchers said.

The study was published May 18 in the journal PLoS ONE.