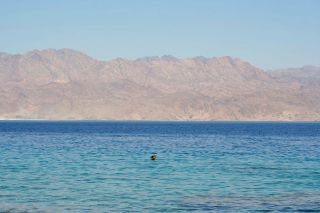 The color of the Red Sea is normally an intense turquoise.
(Image: © Dreamstime)

Damming the Red Sea could alleviate growing energy demands in the Middle East, engineers say, but such a massive project could also have untold ecological impacts, like those brought about by other major dams worldwide.

Scientists and policy makers have recently been exploring more ways to provide people with energy and electricity without using fossil fuels, which are driving Earth's rising temperature.

One fossil-free way to make electricity is to dam a river. But an entire sea?

In a new study, Roelof Dirk Schuiling of Utrecht University in the Netherlands and his colleagues examined the possibility of damming the Red Sea to feed the growing energy demands of surrounding Middle Eastern countries through hydroelectric power. While such a huge project could significantly reduce fossil fuel use, and therefore cut greenhouse gas emissions, it could also cause irrevocable damage to local wildlife and displace people from their homes, the researcher conclude.

A March 2007 report by the World Wide Fund for Nature noted the impact of dams on the ecologies of the Nile, Danube, Rio Grande, South America's La Plata, Australia's Murray-Darling and Asia's Yangtze, Mekong, Salween, and Ganges rivers, including damage to fish habitats and loss of wetlands.

Schuiling's study looked at the possibility of damming the southern entrance of the Red Sea at the Bab-al-Mandab Strait, separating it from the Indian Ocean. (Such a seawater barrier has already been planned for the Strait of Hormuz at the entrance to the Persian Gulf.)

The proposed Bab-al-Mandab dam would stop the inflow of seawater from the Indian Ocean into the Red Sea, and as the sea gradually evaporated (because of its high evaporation rate), water levels on each side of the dam would reach a point where the flow of water could be used to generate electricity. The dam would have the potential to generate 50 gigawatts of power, Schuiling estimates—by comparison, the largest nuclear power plant in the United States has an output of 3.2 gigawatts.

But, as Schuiling and his colleagues point out in their paper, the ecological impacts of such a project would be "irreversible and far-reaching, both in terms of regional as well as environmental impacts."

One of the biggest impacts of a Red Sea dam would come from the increase in salinity in the already very salty Red Sea as its water evaporated and left salt behind. An increase in the salt content of the water could harm the coral reefs, crabs, fish and other organisms that are not adapted to the higher salinity.

The dam would also lower the Red Sea by about 2.1 meters per year (6.8 feet per year), and "consequently, coastal wetlands, mangroves and coral reefs would begin to dry out and die almost as soon as the [dam] closes," the authors wrote in the latest issue of the International Journal of Global Environmental Issues.

This reduction in water level and damage to ecosystems would also endanger the crabs, fish and sea birds that depend on these Red Sea habitats.

The authors also note that because ocean water will no longer flow into the Red Sea, world sea levels would rise by about 12 cm (4.7 inches) over 50 years, reaching a maximum of 30 cm (11.8 inches) after 310 years. But if serious measures were taken to curtail greenhouse gas emissions worldwide, the dam would actually help to slow sea level rise by also reducing emissions, the authors said.