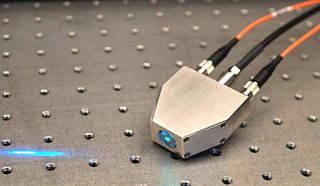 A blue laser light shining on human skin can help detect the amount of fruits and vegetables in a person's diet.
(Image: © Yale University | University of Utah)

The simple method works by revealing carotenoid pigments such as beta-carotene in carrots and lycopene in tomatoes. A modern version of a decades-old technology called resonance Raman spectroscopy (RRS) can detect the energy changes in molecules after being energized by the laser light — a painless process that returns results in about a minute.

"It really derived from an observation that people have known about for decades," said Susan Mayne, head of chronic disease epidemiology at Yale University, "and that is that when people have high-vegetable diets they develop a yellow skin coloration that is particularly noticeable in the palm of the hand because of the accumulation of carotenoids in the skin."

"And we thought, 'Can we use that as a new approach to measure carotenoids in the body noninvasively?'"

The flash of insight came out of a chance meeting between Mayne and Werner Gellermann, a laser physicist at the University of Utah, during a long airline flight. The physicist explained how he was using lasers to detect carotenoid levels in the human eye's retina, because researchers believe high levels in the retina protect against macular degeneration.

The possibility of detecting carotenoids in such a simple manner excited Mayne. She knew that nutritionists currently measure biomarkers by taking blood, urine or skin samples from unhappy patients — a costly and painful process. [No More 'Ouch': New Injector Painlessly Delivers Drugs]

Mayne and her physicist seatmate worked out a grant proposal by the time their plane had landed. Testing of the first prototype device showed the laser method compared well with the current blood-and-skin testing that represents today's gold standard (as well as a 2010 study in The American Journal of Clinical Nutrition).

The new Raman and laser technique still needs some tweaking. Researchers need to figure out how long carotenoids last in the skin, so that they can tell whether a measurement reflects days or weeks worth of fruit and vegetable consumption. They also need to study how well the device can detect changes in carotenoid levels that reflect changes in a person's diet of fruits and vegetables.

But success could mean many happier nutritionists and physicians — not to mention parents and kids. The device has already helped scan 60 preschool kids without any fuss in the span of one afternoon's naptime.