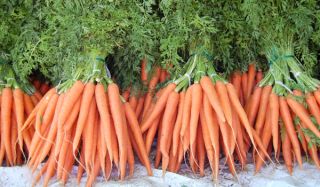 Answer: A cataract is a clouding of the lens, the clear part of the eye that helps focus images like the lens in a camera. Cataracts can blur images and discolor them. Most cataracts are related to aging. More than half of Americans over age 65 have a cataract.

Carrots contain beta-carotene, an orange pigment that is also found in spinach, sweet potatoes, green leaf lettuce, winter squash, cantaloupe, and broccoli. The body converts beta-carotene into vitamin A, which is necessary for normal vision. A lack of vitamin A may cause problems seeing in the dark.

The results of studies of beta-carotene supplementation for cataract prevention are not clear. More study is needed before a conclusion can be drawn.

(Warning: Don't take any over-the-counter supplements such as beta-carotene without consulting your physician.)

Harvard University researchers examined whether taking beta carotene supplements protects against age-related cataracts. There were 22,071 volunteers in a large, ongoing health study. After 12 years, about 2,000 cataracts and almost 1,200 cataract surgeries were reported. In most cases, beta carotene did not appear to lower the risk of getting cataracts.

Beta-carotene is an antioxidant. Antioxidants are substances that may protect your cells against damage. Antioxidants are found in many foods including fruits and vegetables, nuts, grains, and some meats, poultry and fish.

Beta-carotene has been studied to determine its effect upon a variety of disorders, not just cataracts. Here are some of the results:

The American Heart Association recommends obtaining antioxidants, including beta-carotene, from a diet high in fruits, vegetables, and whole grains rather than through supplements, until more information is available from randomized clinical trials. Similar statements have been released by the American Cancer Society and other cancer organizations.

If you would like to read more columns, you can order a copy of "How to be a Healthy Geezer" at www.healthygeezer.com