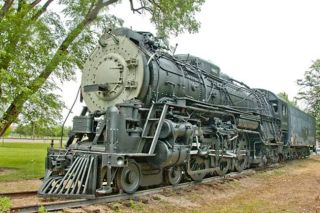 A steam locomotive built in 1937 was given a cosmetic makeover to prepare for its clean energy future.
(Image: © Coalition for Sustainable Rail)

What happens when you combine a steam locomotive from the past century with a new "biocoal" energy source? The result echoes the transformation of Marvel's superhero The Hulk — a powerful beast that is greener and packs more punch than many modern trains.

That combination of old train technology and a new biofuel could lead to a locomotive that requires less fuel, costs less and still has more horsepower than diesel-electric locomotives. The new "CSR Project 130" would eventually deliver a locomotive that can reach 130 miles per hour (209 kilometers per hour) — a modern marvel able to break the world speed record for fastest steam locomotive.

"Once perfected, creating the world's first carbon-neutral locomotive will be just the beginning for this technology which, we hope, will later be used for combined heat and power energy in the developing world as well as reducing the United States' dependence on fossil fuels," said Rod Larkins, special projects director at the University of Minnesota's Institute on the Environment.

Researchers from the University of Minnesota teamed up with the nonprofit Sustainable Rail International to create the Coalition for Sustainable Rail (CSR) and CSR Project 130. Their top goal is to make the cleanest, most powerful passenger train locomotive in the world.

The refurbished locomotive would run on biocoal — a plant-derived material that is roasted to leave behind a blackened mass with the same energy density and material resemblance as coal. But biocoal has the environmentally friendly edge over real coal as a "carbon-neutral" energy source that also produces less ash, smoke and off-gases.

Success would mean more than just smashing a world speed record and seeing more steam locomotives pulling passenger or freight trains. CSR Project 130 aims to design power boilers and electric generators capable of running homes in both the U.S. and in developing world villages. Such spinoff technologies could lead to three times the benefits for every dollar spent on the project's engineering efforts, according to CSR.

To start, CSR bought a steam locomotive built in 1937 and gave it a cosmetic makeover at its current location in Topeka, Kan., in May. A move to Minneapolis within the next 12 months would allow the coalition to complete the engineering overhaul for the locomotive.