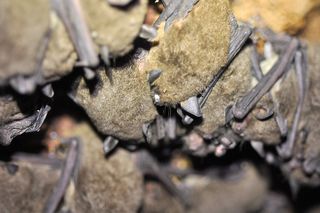 The deadly disease white-nose syndrome has been confirmed in endangered gray bats in Tennessee, the U.S. Fish and Wildlife Service announced today (May 29).

The disease, caused by the fungus Geomyces destructans, has decimated some bat populations in eastern North America after first being documented in a New York cave in 2006. White-nose syndrome (WNS) was named for the powdery, white fungal growth that develops on infected bats' snouts.

"The documented spread of WNS on gray bats is devastating news. This species was well on the road to recovery, and confirmation of the disease is great cause for concern," Paul McKenzie, Missouri Endangered Species Coordinator for the USFWS, said in a statement. "Because gray bats hibernate together in colonies that number in the hundreds of thousands, WNS could expand exponentially across the range of the species."

Gray bats' preference for living together in large numbers in only a few caves in the southeastern U.S. has made them particularly vulnerable to human disturbances. However, conservation measures, such as restricting human access to their hibernation and roosting sites, have helped gray bat populations recover in many areas, according to the USFWS.

Recent research indicates that white-nose syndrome is a European import. The fungus has been found in European bats, but does not cause the mass mortalities that have been seen in North American bats. Scientists don't know why the difference exists between the continents, but some have pointed out that European bats live in much smaller colonies, and that this difference may factor in.

It is not yet clear what the discovery could mean for the future of gray bats. Different species respond differently to the infection, and it is possible the gray bats have been exposed to the fungus for some time without succumbing to it, according to the USFWS.

Several bats in Hawkins and Montgomery counties in Tennessee were found to have white fungus on their muzzles, wings and tails. The disease was diagnosed by researchers at the University of Georgia, and confirmed by the USGS National Wildlife Health Center in Madison, Wis.