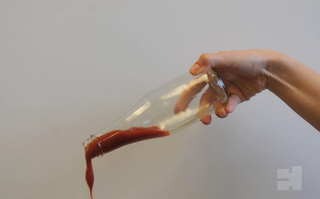 Tired of vainly thumping the bottom of a ketchup bottle, trying to knock loose that last inch of condiment? There's good news: A team of engineers at the Massachusetts Institute of Technology has invented a bottle coating that makes ketchup pour as easily as milk. They say it could save 1 million tons of perfectly good but inaccessible ketchup and other food from being thrown out each year — not to mention saving untold hours spent in frustration.

MIT doctoral candidate Dave Smith and his team of mechanical engineers and nanotechnology researchers spent the past two months considering, and then solving, the notorious difficulty of pouring thick sauces out of bottles. They invented LiquiGlide, a slippery coating made of nontoxic, FDA-approved materials that can be applied to the insides of food packaging, such as ketchup and mayonnaise bottles, and honey jars.

LiquiGlide is unique because it's "kind of a structured liquid," Smith told the website FastCompany. "It's rigid like a solid, but it's lubricated like a liquid." The substance can be sprayed onto the surfaces of many types of packaging, including glass and plastic. As you can see in the video, the coating allows thick sauces that would normally move sluggishly against those materials' surfaces to slide out of their containers, as if suspended in space. "It just floats right onto the sandwich," Smith said.

As for what the slippery coating is made of, Smith isn't telling, but he and his team worked only with materials that already have the FDA stamp of approval for use in food packaging, for ease of entry into the marketplace. "I can't say what they are, but we've patented the hell out of it," he said. The engineers are in talks with bottle companies already. [Science Reveals How Not to Spill Your Coffee When Walking]

LiquiGlide could have other future applications, too, Smith said. "We were really interested in — and still are — using this coating for anti-icing, or for preventing clogs that form in oil and gas lines, or for nonwetting applications like, say, on windshields."

Stuck fluids, your days are numbered.