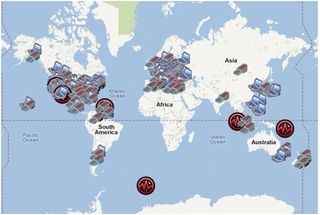 Citizen scientists are helping to improve scientists' understanding of how Earth works by collecting statistics and observations that full-time scientists don't have the people power and other resources to gather.

Some citizen-science programs take volunteers under their wings and into the field to gather data. Others, such as the Quake-Catcher Network (QCN), are more of the "hands-free" genre, only requiring volunteers to connect their computers to networks that do the data collection and analysis.

QCN is a collaborative effort among five academic institutions, plus the U.S. Geological Survey. Partially funded by the National Science Foundation, the QCN organizes volunteers who each host a low-cost vibration sensor on an Internet-connected desktop or laptop computer. The home-based stations automatically send QCN servers information in real time about ground tremors related to moderate-to-large earthquakes.

The QCN-connected computers act as a motion-sensing network that sends data about ground shaking whenever it occurs. The volunteers' computers don't actually crunch data; rather they act as a global nervous system for the monitoring of earthquakes. In fact, the QCN is currently the world's largest, low-cost, "strong-motion" seismic network. (Strong motion generally refers to ground motion that is strong enough to be felt by humans.)

Earlier this year in California, the network demonstrated its potential to contribute to the development of an effective quake-warning system. On March 5, QCN computers detected an earthquake a whopping 10 seconds before the quake motion itself rippled from its epicenter in El Cerrito — in Contra Costa County — to Stanford University 45 miles away, where QCN servers are located.

What does 10 seconds provide? Under some circumstances, this advance warning could save lives by, for example, alerting elevators to let passengers out at the nearest floor; helping to warn individuals in vulnerable buildings to seek shelter, and setting off triggers that would automatically shut off heavy machinery.

Scientists use data produced by the QCN to improve their understanding of movements around faults during earthquakes, assess seismic hazards and building responses, and design early-warning systems that support rapid response to disasters. Data from QCN studies have been published in prestigious scientific publications.

In addition to supporting research on earthquakes throughout the U.S. and elsewhere, the low-cost QCN sensors offer special promise for researchers in other countries (like in Taiwan) who cannot afford traditional earthquake-monitoring technologies.

The QCN Needs You!

The ranks of "citizen scientists" have swelled to more than 100,000 volunteers of all ages who are generating a steady stream of important, and otherwise unavailable, data for researchers, said David Hanych of the National Science Foundation, which funds some of the more than 600 citizen-scientist projects currently under way.

The QCN currently has about 2,000 volunteers in some 70 countries; those volunteers include private citizens; students at schools, colleges and universities; and community organizations. The QCN membership ranks are growing on a daily basis, and as the number of QCN volunteers increases, so does the network's geographic coverage and precision — every sensor counts.

If you live in certain earthquake-prone regions, QCN issues the vibration sensors free of cost. In other areas, for the sensors cost $49. If you are a teacher at a K-12 school, the price drops to just $5 and brings with it the world of applied science; QCN offers lessons and other educational materials to teachers.