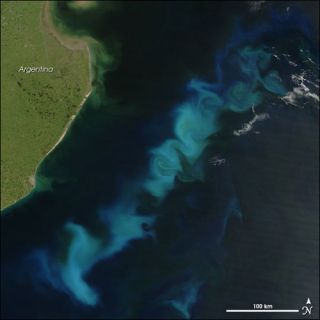 The seas themselves might be modified to combat global warming by absorbing climate-altering carbon dioxide from the air, research now reveals.

The new approach scientists have theorized—which ideally modifies seawater's chemical composition using treatment plants near volcanoes and coastlines—could also help benefit coral reefs worldwide, they suggest. But they caution such a technique could potentially also have detrimental environmental impacts that need to be minimized.

Carbon dioxide is a "greenhouse gas" that traps heat from the sun. The oceans naturally both absorb and release carbon dioxide, and researchers have investigated whether they can make the seas capture more of the gas than normal to combat global warming.

One notion brought up in the past involves fertilizing the seas with iron to encourage the growth of plankton, which would absorb carbon dioxide during photosynthesis just as land plants do, "but a lot of them would just release carbon dioxide again," said Harvard geoscientist Kurt House.

Instead, House and his colleagues propose extracting acid from the seas. The less acidic the oceans are, the more they absorb carbon.

The scientists envision treatment plants that suck in seawater and remove hydrochloric acid. The oceans naturally contain hydrogen and chloride ions—the former is a component of water, while the latter is an ingredient of common salt—which together can make hydrochloric acid. A number of industrial processes can remove the acid from seawater, including ones used in the vitamin and chlorine industries.

"It's certainly an interesting approach," said Columbia University environmental engineer Frank Zeman, who did not participate in this study.

Ideally, these novel treatment plants would be located near volcanic coastlines, the researchers explained. The silicates in volcanic rocks could neutralize the extracted acid, while the volcano itself could generate the geothermal power needed to run such operations.

"If you used coal or some other combustion means to power the plants, that would just send more carbon dioxide into the air and defeat the entire point," House said.

In a way, this process resembles one means by which nature removes carbon dioxide from the air. The gas can dissolve in water to form weak carbonic acid. As this water percolates through silicate rock, the carbonic acid gets neutralized, forming bicarbonate, the most plentiful and innocuous form of carbon in the oceans.

"We have found a way to swap the weak carbonic acid with a much stronger one, hydrochloric acid, and thus accelerate the pace to industrial rates," House said. "Essentially, our technology dramatically accelerates a cleaning process that nature herself uses for greenhouse gas accumulation."

This method could also combat the acidification of the oceans that is now threatening coral reefs worldwide. The amount of carbon dioxide is growing in the atmosphere, increasing the amount of carbonic acid in the sea. Coral reefs and other structures made of calcium carbonate then become more vulnerable to dissolving.

The potential environmental impacts of this method need close scrutiny as well. The plants would all discharge alkaline water, "which could kill a lot of life local to the plant," House said. "Within a distance of a couple of hundred meters, there could definitely be some damage."

Another potentially unpleasant consequence of this process could be the production of organohalogens. These compounds helped create the hole in the ozone layer. In addition, seawater contains a variety of other ions and compounds that might readily spoil the process.

"More work is be needed to bring down the cost and minimize other environmental effects," said researcher Christopher House, Kurt House's brother and a geoscientist at Pennsylvania State University.

The most economic way to deal with carbon dioxide is to simply reduce the amount we now emit, House said, either through more efficient devices or with so-called "carbon dioxide scrubbers" on power plants. "But if things go really bad with the climate, at least we have technology we could scale up to decrease atmospheric carbon dioxide concentrations," House said. "And unlike strategies that just reduce emissions, this can actually pull carbon dioxide back."

The scientists detailed their findings online Nov. 7 in the journal Environmental Science & Technology.