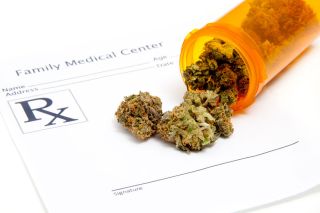 Smoking marijuana may improve some symptoms of multiple sclerosis, a new study suggests.

Patients with multiple sclerosis in the study had less muscle tightness, also called spasticity, and less pain after they smoked marijuana, compared with after they took a placebo.

Spasticity is a common symptom of multiple sclerosis (MS) and can cause exaggerated reflexes, spasms and problems walking. Existing medications can ease spasticity, but they cause side effects, and not all MS patients are helped by them.

However, patients in the study experienced short-term decreases in their abilities to pay attention and concentrate after they smoked marijuana. Patients also reported feeling "high" after smoking marijuana, and two patients withdrew from the study because they felt uncomfortably high.

More research is needed to confirm the findings and to investigate whether lower doses of marijuana may have similar benefits with fewer adverse effects, said study researcher Dr. Jody Corey-Bloom, professor of neurosciences and director of the Multiple Sclerosis Center at the University of California, San Diego.

The study is published today (May 14) in the Canadian Medical Association Journal.

Previous studies have suggested marijuana use may have benefits for MS patients, but most have investigated oral forms of the drug, including mouth sprays and capsules. In addition, most studies have asked patients to report changes in their symptoms, rather than having a researcher objectively assess them.

In the new study, Corey-Bloom and colleagues evaluated 30 MS patients, 19 of whom were female, and more than half of whom needed walking aids.

Shortly after each treatment session, the researchers assessed participants with a test specifically designed to measure spasticity.

After smoking marijuana, participants experienced a 30 percent reduction in spasticity, compared with when they smoked the placebo cigarette, Corey-Bloom said.

However, patients did not see improvements in the time it took them to walk 25 feet. And 45 minutes after their sessions, participants experienced a small but significant decrease in scores on tests designed to measure attention and concentration.

Participants were not told whether they recieved a placebo or a true marijuana cigarette, more than half correctly guessed the sessions when they were given marijuana.

Although cannabis may one day be used to treat spasticity in MS patients, delivery through a marijuana cigarette is "probably not the way that it would be done," because of the side effects patients experience, said Dr. Nicholas LaRocca, vice president of health care delivery at the National Multiple Sclerosis Society, who was not involved in the study. "The majority of people with MS experience cognitive changes at some point in their lives," LaRocca said. "We don’t want to add any additional cognitive deficits with treatment," he said.

Researchers are currently investigating other treatments for spasticity, including exercise and Botox injections. "We need to continue to explore all of those possibilities, because any given person with MS may respond better to one [treatment] than another," LaRocca said.

Because many studies have not found a benefit of marijuana for MS patients, and because the new study was small, it's important for researchers to replicate the findings, said Dr. Karen Blitz-Shabbir, director of the Multiple Sclerosis Center at North Shore-Long Island Jewish Health System in Manhasset, N.Y.

Marijuana cigarettes have disadvantages compared with oral forms of the drug, including potential effects on the lungs and problems with administrating a controlled dose, Blitz-Shabbir said.

Pass it on: Smoking marijuana may reduce spasticity in MS patients, but it's not clear whether such a treatment would ever be prescribed.