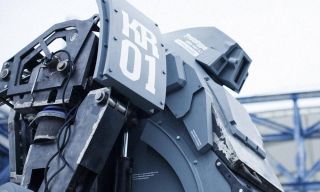 The Vaudeville robot allows a human pilot to sit inside and resembles a giant mechanical warrior out of science fiction.
(Image: © Suidobashi Heavy Industry)

Tomorrow's world is staring you in the face, in the form of a 13-foot-tall robot capable of fitting a human pilot inside. Japanese robot enthusiasts have begun building that futuristic vision — and they have several clever ideas for controlling the nearly five-ton robot in ways that evoke different science fiction films.

The Vaudeville robot, which rolls on wheels, is being developed by a small group that calls itself Suidobashi Heavy Industry. The group's website reflects some outdated information — the robot was supposed to go on sale last December. Someone uploaded a YouTube video of the robot April 30, and it was recently discovered by the Plastic Pals blog.

One control scheme resembles how human soldiers operate their giant robot warriors in science fiction films such as "Avatar": The person simply grips handle bars inside the pilot's seat to control the robot's arms. Microsoft's motion-sensing Kinect system even may allow the human pilot to control which way the robotic cockpit faces simply by turning his or her head (a feature the U.S. Army wants for its attack helicopters).

The robot's "mobile 3G Internet access" would also allow for remote control, according to the Suidobashi Heavy Industry website. That could mean a person with a wireless controller or a laptop directing the robot's movements from outside.

A third control scheme may remind people of the robot boxing film "Real Steel": The robot could use Kinect's motion-sensing capability to mirror the movements of a human standing outside it. Perhaps a TV show featuring battling robotic boxers is not so far off?

While the Vaudeville project may not have immediate practical uses, Japanese and U.S. companies have experimented with other robotic power suits that fit more closely to the human body. The Raytheon defense company has previously shown off its Exoskeleton (XOS 2) suit, which adds mechanical power to a soldier's natural strength.