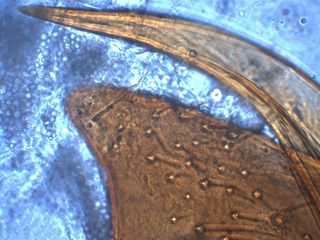 An image of the male's "dagger penis," which they use to inseminate the female through the female's exoskeleton.
(Image: © Thomas Cameron)

Violent sex is taken to an extreme in warehouse pirate bugs, where the male uses his daggerlike penis to break though the female's body wall and insert sperm directly into her abdomen. Now researchers have found that after enduring bouts of traumatic insemination, the females live fast and die young.

Those female warehouse pirate bugs take advantage of what life they have left and produce more eggs quicker than other pirate bugs.

"These multiply mated females died at a significantly younger age, but they started laying eggs earlier and at a higher rate to compensate," study researcher Thomas Cameron, of Umeå University in Sweden, told LiveScience in an email. "I would say it's not quite right to say that multiple mating is good for females, but it is something that they have evolved to deal with."

Though the warehouse pirate bug may be able to mate normally (inserting the penis into the female's reproductive tract), they seem to have ditched this for the traumatic type of mating, Cameron said.

So they tested three groups of 21 female warehouse pirate bugs in the lab. The first group spent the day with a dead male bug, and stayed virgins. The second group mated with one male, and the third group mated with three males.

The females then lived their lives out in the lab under the researchers' watchful eyes. All of the mated females had a similar number of offspring, but the females that mated with the three males laid their eggs quicker and died earlier. [The Weirdest Animal Penises]

The researchers think multiple matings may signal the females to lay more eggs every day, or the females could be injured from the dagger penises and worried about dying, so they laid more eggs earlier. The singly mated females could have also been waiting for more suitors to take a stab before laying their eggs.

Though their sex acts may seem scary, the warehouse pirate bug is important in keeping grain pests under control.

"It is quite a cool little beastie," Cameron said. "It is very adept at preying on immobile insect eggs, but when it gets the chance it pierces a moth or beetle larvae with this venom as then the prey crawls off and dies. The venom starts digesting the structure of the prey's body and the bug seeks it out and has a drink."

The study will be published tomorrow (May 9) in the journal Biology Letters.